On Monday, the Jets announced the signing of punter Matt Darr. This officially marks the first signing by interim GM/head coach Adam Gase. 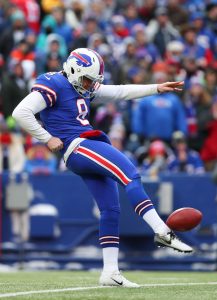 Gase coached Darr in Miami, so he’s already familiar with his skill set. For now, he’ll give Gang Green a second punting option to evaluate alongside Lachlan Edwards.

Darr beat out Brandon Fields to become the Dolphins’ punter in 2015 and held the job in 2016, Gase’s first season in Miami. He was out of work in 2017, but hooked on with the Bills for five games last year. For his career, Darr owns 45.4 yards per kick average.

This is Gase’s first signing as the placeholder GM, but his second transaction –his first move came hours after Mike Maccagnan‘s dismissal when he shipped linebacker Darron Lee to the Chiefs for a late draft choice. Meanwhile, the Jets appear to be eyeing Peyton Manning for the permanent post, but it’s not clear if the QB is interested.