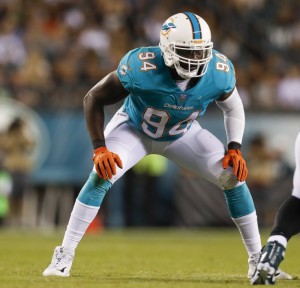 The Dolphins are planning to cut linebacker Lawrence Timmons and tight end Julius Thomas prior to the beginning of the new league year on March 14 to help relieve cap issues, per Armando Salguero of the Miami Herald. Salguero also speculates that the team may look to shed the fifth-year option for offensive tackle Ja’Wuan James, making him a free agent. 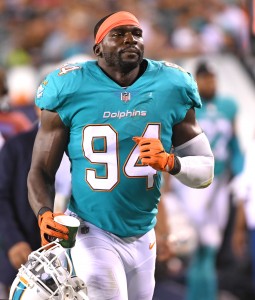 In total, the move would save the Dolphins $21MM and would open up around $11MM in cap space. As it stands without the cuts, the Dolphins are projected to be $7MM-$8MM over a projected $177MM salary cap, with 55 players under contract.

By cutting Thomas, the Dolphins would save $6.6MM in cap room and would save $5,5 MM by cutting Timmons. If they don’t pick up the option on James, that would save them $9.34MM. Salguero points out that $11MM in cap space may not be enough to make a major splash in free agency this offseason, considering what sources described to him as a shallow free agent pool that could lead to prices being driven up for top-level talent.

Timmons signed a two-year, $12MM with the Dolphins last offseason. He appeared in 14 games (13 starts) and recorded 58 tackles, his lowest total since 2009. Thomas ended his first season with the Dolphins on injured reserve. The two-time Pro Bowler was set to enter the second season of a two-year, $12MM deal. James made eight starts at right tackle last season and has made 47 starts through the first four years of his career.

The Dolphins may be in the market for an outside linebacker, with Koa Misi also due to hit free agency. Backup tight end Anthony Fasano is slated to become an unrestricted free agent this offseason as well.

Dolphins linebacker Lawrence Timmons has been reinstated by the team, Adam Schefter of ESPN.com (Twitter link) has learned. With his suspension lifted, he will play on Sunday versus the Saints.

Timmons went AWOL prior to Miami’s Week 2 contest and was suspended indefinitely for conduct detrimental to the team. At the time of the ban, the Dolphins gave little indication as to whether Timmons would ever be able to rejoin the squad. We later learned that Timmons left the team in L.A. to visit the mother of his child in Pennsylvania. He did not notify the team of his plans beforehand.

Timmons reportedly visited the Steelers (his former team) during Miami’s Week 1 bye and watched the club practice. We don’t know exactly what is going on with the veteran, but it sounds like homesickness is at least part of it.

The Dolphins managed to beat the Chargers without Timmons in Week 2, but they lost to the Jets on Sunday. Miami will look to get back on the right track this weekend against the Saints in London, England.

In what amounts to a bizarre twist in an already odd story, Dolphins linebacker Lawrence Timmons visited his former team — the Steelers — during Miami’s Week 1 bye and watched the club practice, reports Jason La Canfora of CBSSports.com.

Timmons, of course, went AWOL prior to Miami’s Week 2 contest and has subsequently been suspended indefinitely. But prior to that episode, Timmons ventured to Pittsburgh (his professional home from 2007-16) and was allowed into the Steelers’ facility. Most players and team officials were unaware Timmons planned to attend practice, although head coach Mike Tomlin had some idea of the visit, per La Canfora.

Timmons reportedly told his former Steelers teammates that he wanted to return to Pittsburgh, and essentially called his decision to sign with the Dolphins this offseason a mistake. The 31-year-old Timmons inked a two-year, $12MM deal with Miami in March that included $11MM in full guarantees.

Clearly, an under-contract player attending the practice of another NFL team is extremely peculiar event, but it’s unclear if that incident will affect Timmons’ status with the Dolphins. Head coach Adam Gase seemingly opened the window for a Timmons return last week, but La Canfora reports the veteran linebacker may never play a down for the club.

The Dolphins announced they have suspended linebacker Lawrence Timmons indefinitely. Timmons went AWOL on the team prior to the Week 2 game against the Chargers.

It’s not immediately clear whether the team will work with Timmons to facilitate a return. Per the terms of the CBA, Miami can suspend him for up to four games for conduct detrimental to the team. If that happens, the remaining guarantees in the veteran’s contract will void. That would free the Dolphins from the rest of the two-year, $12MM deal he inked in the offseason.

Timmons apparently skipped town to visit the mother of his child in Pennsylvania. He did not notify the team of his plans beforehand, causing the club to file a missing persons report with police.

Until Sunday, Timmons had not missed a game since 2009. It sounds like he’ll be missing several more, unless he can make good with team brass.

The Dolphins have limited options with linebacker Lawrence Timmons, who left the team on Sunday and forced Miami to file am missing person report, but one avenue could be the left squad list, tweets Adam Beasley of the Miami Herald. That mechanism would force Timmons’ contract to toll, but only if he doesn’t return to the club within five days of notice, per Beasley. The Dolphins could also suspend Timmons for up to four games for conduct detrimental, a move that would void the remaining guarantees in the veteran defender’s deal, as Mike Florio of Pro Football Talk writes.