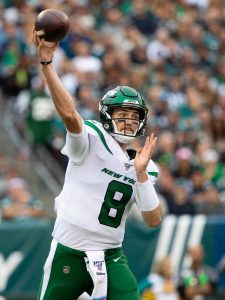 When the Jets take on the Browns on Monday night, they’ll be without starting quarterback Sam Darnold. Darnold will be held out as he recovers from mononucleosis, head coach Adam Gase announced.

Darnold was held out of Wednesday’s practice this week with an undisclosed and previously undiagnosed illness. The illness was a bit more serious than first thought and, according to Gase, Darnold has lost a significant amount of weight as a result. It’s possible that Darnold will miss additional time, but the team should have a better read on his condition next week.

Without Darnold, the Jets will turn to Trevor Siemian as their Week 2 starter. To back him up, the club has promoted QB Luke Falk from the practice squad.

Siemian, 27, fared reasonably well as the 2016 Broncos’ starter, leading the team to a 9-7 record and throwing 18 touchdown passes against ten interceptions. In 2017, he rated as one of the NFL’s worst quarterbacks, prompting the Broncos to change course. The Jets inked him to a one-year deal this offseason to serve as Darnold’s safety net and he’ll be thrust into action as the club looks to reach .500.