So much for the Jets standing pat at cornerback. On Tuesday, the Jets signed veteran Marcus Cooper, per a team announcement.

Cooper was released on Tuesday by the Lions. The 29-year-old was a seventh-round of the 49ers in 2013 but has already played for four different NFL teams. In total, he has 74 appearances and seven interceptions to his credit.

This isn’t the major CB upgrade that Jets fans were hoping for this season, but it will provide the Jets with depth for however long Trumaine Johnson needs to recover from his hamstring injury. Currently, Darryl Roberts, Arthur Maulet, and Brian Poole stand as the Jets’ three best healthy corners.

The Lions announced that cornerback Marcus Cooper has been released. To take his place, the club has signed fellow CB Jamar Summers. 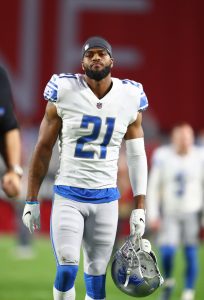 Cooper arrived in Detroit via waiver claim in November and re-signed with the team in March. He didn’t play much with the Bears early on in 2018, but he did suit up for four games with the Lions. The 29-year-old defender has made 28 starts in a six-season career, having intercepted seven passes. All of those picks came during his two most prominent years as a corner — 2013 in Kansas City and 2016 in Arizona.

Summers, meanwhile, was in the now-defunct AAF before a short stint with the Dolphins. He’ll now push to make the Lions’ 53-man cut.

Having been cut midway through last season, Marcus Cooper changed NFC North allegiances recently. He will stay with his second 2018 team. 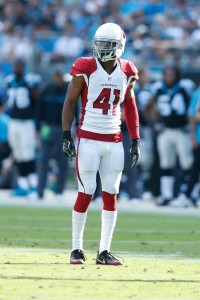 The Lions are re-signing Cooper, Adam Caplan of Sirius XM Radio tweets. The veteran cornerback arrived in Detroit via waiver claim in November and looks set to stay in the Motor City as a depth piece.

Cooper played just 39 snaps last season, being buried on Chicago’s depth chart. With Detroit, he figures to compete for time as a backup and contribute on special teams. With the 2017 Bears, Cooper started four games but was benched during that season. He was a full-time player with the 2016 Cardinals, leading to a mid-level Bears contract a year later.

The 29-year-old defender has made 28 starts in a six-season career, having intercepted seven passes. All of those picks came during his two most prominent years as a corner — 2013 in Kansas City and 2016 in Arizona. The Lions added Justin Coleman earlier this week but still have some uncertainty beyond he and Darius Slay, so it would not be surprising if more additions arrived later this offseason.

Marcus Cooper has not factored into the 2018 season much, but he’ll have a chance to make up for lost time with another NFC North team. 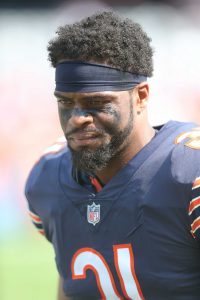 The Lions claimed the veteran cornerback off waivers from the Bears on Thursday, Ian Rapoport of NFL.com reports (on Twitter). The claim will be deferred to Friday.

The Bears defeated the Lions in Thanksgiving’s early game, and Cooper will be set for a Chicago-to-Detroit flight soon as well.

He’s played just three snaps this season for the division-leading Bears. A hamstring injury’s intervened, but the Lions are presumably viewing the 28-year-old corner as a better bet to see snaps than the Bears did this year.

Having recently picked up cornerback/special-teamer Don Carey, the Lions may be set to make another move at corner Friday. They have six on the roster prior to Cooper’s arrival. The former Chiefs and Cardinals defender signed a one-year, $1.5MM deal to return to Chicago this year, doing so shortly after the team cut bait on the three-year, $13.5MM pact agreed to in 2017.

Marcus Cooper‘s second Bears season did not feature much work. The veteran cornerback logged just three defensive snaps in 2018, and his time with Chicago may be ending.

The Bears, who are facing the prospect of being without Mitch Trubisky for their Thanksgiving Day game against the Lions, promoted quarterback Tyler Bray from their practice squad, Rich Campbell of the Chicago Tribune tweets.

Trubisky was sore this morning and didn’t have as much shoulder movement as he expected to, Adam Schefter of ESPN.com tweets, adding it’s likely Chase Daniel will start in Detroit. This would be Daniel’s first start with the Bears. He did see action in blowout wins over the Buccaneers and Bills, however. Trubisky is listed as doubtful, pointing to a Daniel start in a key game for the NFC North-leading Bears.

Chicago may well have the quarterback depth chart the Chiefs once did behind Alex Smith for a three-year stretch earlier this decade. Both Daniel and Bray were Kansas City backups during a few of Matt Nagy‘s seasons in Kansas City. Despite being a 2013 UDFA, Bray — a Tennessee product — has only thrown one pass in a game. He signed with the Bears this offseason.

Cooper re-signed with the Bears on a one-year, $1.5MM deal this year as well. He started in four games and played in 15 last season, making 30 tackles. The 28-year-old corner missed time this year with a hamstring injury but has been buried on Chicago’s depth chart. He will head to waivers.

The Bears are bringing back free-agent cornerback Marcus Cooper with a one-year, $2.5MM deal, according to Adam Caplan (on Twitter). Cooper had a visit on Friday with the Cardinals, who agreed to a one-year deal with cornerback Bene Benwikere, but they were still reported to have interest.

Cooper appeared in 15 games last season for the Bears, making four starts. His most extensive playing time came with the Cardinals in 2016 when he played in 15 games (13 starts) and collected four interceptions. The metrics were not kind to him that season, though, as he ranked No. 62 among 84 qualifiers in Football Outsiders‘ success rate.

Chicago signed Cooper to a three-year, $16MM deal following his 2016 campaign with the Cardinals but released him last week. He played on just a quarter of the Bears’ defensive snaps last season, ranking fourth out of the team’s cornerbacks.

The Bears have made their secondary a priority this offseason, placing their transition tag on Kyle Fuller and re-signing Prince Amukamara. Cooper is set to work with the likes of Bryce Callahan and recently-signed Sherrick McManis as backups to Fuller and Amukamara.

The 49ers drafted Cooper in the seventh round of the 2013 draft out of Rutgers. He never suited up for the 49ers, though, and spent three seasons with the Chiefs before landing with the Cardinals in 2016.

Cooper should be familiar to Arizona management after spending the 2016 campaign in the desert. That season still marks the 28-year-old Cooper’s only season as a full-time starter, as he lined up opposite Patrick Peterson for 13 games. While saw 83% playtime, Cooper wasn’t all that successful, as he ranked just 62nd among 84 qualifiers in Football Outsiders‘ success rate.

Despite that lackluster performance, Cooper garnered a three-year, $16MM deal from the Bears last spring. Expected to be a starter, Cooper only played on a quarter of Chicago’s defensive snaps (fourth-most among Bears CBs), collecting 15 tackles and three passes defensed during that time. He was released last week, and hasn’t generated any other known interest at this point.

The Cardinals, meanwhile, are (once again) in need of a corner to play next to Peterson, as veteran Tramon Williams — who played exceedingly well in 2017 — signed a two-year deal with the Packers on Thursday. Justin Bethel, and C.J. Goodwin are both unrestricted free agents, leaving former third-rounder Brandon Williams, who played just a single defensive snap last year, as Arizona’s projected No. 2 cornerback.