Doug Marrone will head to East Rutherford on Sunday as the Jaguars’ head coach, but he could have just as easily been leading the Jets this weekend, as Rich Cimini of ESPN.com and Brian Costello of the New York Post detail. After Marrone opted out of his Bills contract following the 2014 campaign, Marrone was considered the favorite for the Gang Green job, especially given that former NFL general manager and Jets consultant Charley Casserly had strong ties to Marrone. New York ultimately chose Todd Bowles, however, and Marrone was hired as Jacksonville’s offense line coach before being promoted to head coach midway through the 2016 season.

The Jets have placed wide receiver Charone Peake on injured reserve. Peake suffered an ankle injury during Sunday’s win against the Dolphins and did not return to action. His roster spot will be filled by the addition of running back Travaris Cadet. 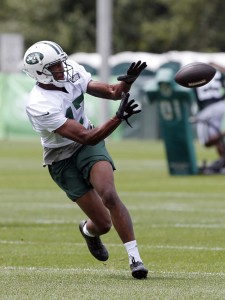 X-Rays on Peake’s ankle came back negative earlier this week, but the Jets are apparently taking the cautious approach with him. In theory, he can return from IR if the Jets choose to use one of their two IR-DTR spots on him, but he’ll have to wait at least eight weeks before suiting up again.

The Jets’ WR group underwent some major changes this year after the team released Eric Decker rising star Quincy Enunwa suffered a season-ending neck injury. Some thought Peake would be in line for an increased role, but he has drawn only one target through three games. The bulk of his playing time has come on special teams.

The latest round of draft pick signings from around the NFL features a pair of second-round selections, including a New York quarterback who could get a chance to see the field in 2016, depending on how the rest of the offseason and training camp plays out. Let’s round up the latest signings…