The Kelechi Osemele saga took another turn Saturday. The Jets released the veteran guard, who recently underwent a shoulder surgery that has been a point of contention between he and the team. 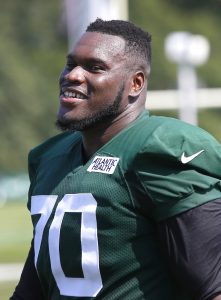 Osemele is set to miss the rest of the season, and this transaction will be a key point in an off-field battle between the eighth-year guard and the Jets. Gang Green promoted linebacker James Burgess from its practice squad to take Osemele’s roster spot.

With this move coming instead of an IR designation, a grievance will follow. A $579K fine came Osemele’s way last week, with Rich Cimini of ESPN.com reporting the Jets docked him a full game check — the maximum amount possible in this case. Osemele was set to earn $5.2MM over the rest of this season, which contained a $9.85MM base salary.

“The Jets owe him the balance of his contract both under the standard injury guarantee provision of the player contract and under termination pay. We will pursue … all fines to be rescinded through grievances,” said Andrew Kessler, one of Osemele’s agents (Twitter link via Cimini).

The Jets acquired the 30-year-old blocker from the Raiders this offseason, with the move requiring only a Day 3 draft pick. The two-time Pro Bowler started in three Jets games but did so despite shoulder pain. He left the Jets’ Week 3 game due to the injury and said he needed surgery. The Jets pivoted to Alex Lewis at left guard but soon contested Osemele’s stance, with reports circulating the team and doctors believed he could play through the pain. Osemele’s camp insisted that was not the case, indicating even painkillers were not allowing him to perform effectively. A successful surgery commenced Friday.

The NFLPA announced it would back Osemele in this process, which has certainly accelerated Saturday. The former second-round pick was playing on the then-guard-record five-year, $58.5MM deal he signed with the Raiders in 2016. Osemele was due an $11.35MM non-guaranteed base salary next season, but the Jets were expected to release him after this season. Osemele’s team and the NFLPA are also considering to-be-determined actions against the Jets’ team doctors, with the surgery revealing more damage than anticipated.

This saga has not painted the Jets in the best light, with the issue raising eyebrows among current Jets players and respective agents. The team is unlikely to prevail in the forthcoming grievance, barring evidence indicating Osemele encountered the injury away from the team or sought surgery in order to preserve himself for free agency, Jason Fitzgerald of OverTheCap tweets.