The Texans have agreed to a one-year extension with cornerback/return man Tremon Smith, according to Aaron Wilson of Sports Talk 790. The deal, which keeps Smith under club control through 2022, includes a $1.1MM base salary. Ian Rapoport of NFL.com adds that Smith also gets a $150K signing bonus, a $50K workout bonus, and a $100K roster bonus, thereby raising the value to $1.4MM. If he hits certain incentives, Smith could max out at $1.6MM (Twitter link). 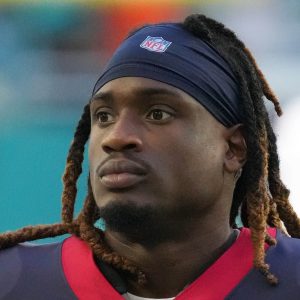 Smith has averaged 26.0 on kickoff returns this year while appearing on ~80% of the Texans’ special teams plays. He’s also seen a little bit of time on defense, appearing on 14% of the team’s snaps. He might not be a star, but he’s a key cog in the third facet of the game. The Texans clearly value his work – Smith is the first Texans player to score an extension since the start of the 2021 season.

After stops with the Chiefs, Colts, Packers, and Eagles, Smith seems to have found a home in Houston. It also helps that he’s playing under the tutelage of Frank Ross, who was also his special teams coordinator in Indianapolis.

Ross and Smith will see their former team tomorrow as the Texans look to improve on their 2-9 record.

The other 49ers starting defensive tackle from Super Bowl LIV the Colts added this offseason, Sheldon Day will miss time to start the season.

Day, who came to Indianapolis after the Colts’ DeForest Buckner game, underwent a knee surgery this offseason and will begin the 2020 campaign on IR. However, he will not have to miss the customary eight games required for IR-return players.

Teams can activate players off IR after three weeks this year, thanks to the COVID-19-related rule adjustments for this season. There is no limit to how many players can return from IR. The new CBA will allow for three in future years, assuming the NFL nixes the pandemic-induced rule changes in 2021, but this year the league will permit maximum roster flexibility to aid teams in this unusual landscape.

Day started each of the 49ers’ three playoff games last year but mostly worked in a reserve capacity in San Francisco. The former fourth-round pick will join Kemoko Turay as Colt D-linemen unavailable to start the season. Turay will begin the year on the Colts’ reserve/PUP list, which still requires a six-game absence.

The Colts signed tackle Chaz Green to take Day’s roster spot. They also added 14 players to their practice squad Sunday. Longtime Steelers tight end Xavier Grimble agreed to join the Colts’ P-squad, after the team made him one of its Saturday cuts.

On Monday, the Packers announced that they have claimed former Jaguars running back Tyler Ervin. In a related move, the Packers dropped kick returner kick and punt returner Tremon Smith.

Smith, a 2018 sixth-round pick, broke onto the scene early on with the Chiefs and earned NFL All-Rookie Team honors as a return man. He ultimately finished the 2018 season with 33 kick returns for 886 yards (26.8-yard average). He played sparingly on defense, despite being formally listed as a cornerback, compiling only five tackles and one pass defended in 14 games. The Chiefs also briefly experimented with him at running back on the practice field and in preseason. This year, he appeared in seven games for Green Bay and returned 13 kicks for 303 yards, good for a 23.3 yard average.

After their latest special teams shuffle, the Packers will return to action on Sunday to take on the Redskins at Lambeau Field. At 9-3, they have a 93% chance of reaching the playoffs, per FiveThirtyEight.