The Chiefs and Seahawks have agreed to a swap of linebackers, as Kansas City will send D.J. Alexander to the Seattle in exchange for Kevin Pierre-Louis, the Chiefs announced today. 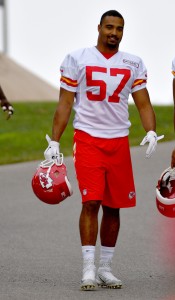 Alexander, 25, was selected in the fifth round of the 2015 draft, and has primarily contributed on special teams thus far in his career. He’s appeared in all 32 games in two seasons with the Chiefs, but has just one start. Last year, he posted five tackles while playing 48 defensive snaps and 358 special teams snaps. Alexander earned a Pro Bowl nod in 2016, and was named as one of the league’s best special teamers by Pro Football Focus.

The primary difference between Alexander and Pierre-Louis is team control. Alexander is signed for two more seasons, with base salaries below $800K in each year. Kansas City will only get Pierre-Louis through 2017, however. He’ll earn $690K next year.