Jhurell Pressley led the AAF (R.I.P) in rushing yards, but he has yet to land an NFL contract. That could be because Presley has been suspended by the NFL for two games, as Ian Rapoport of NFL.com (on Twitter) first reported. The ban stems from a violation of the NFL’s policy on performance-enhancing drugs, Ryan Dunleavy of NJ.com hears. 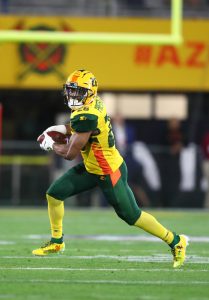 Still, Pressley has two workouts scheduled for this week, so a deal could be just around the corner. Pressley impressed with 431 yards and one touchdown on 98 carries for the Arizona Hotshots and could hold appeal as an RB depth option for clubs.

Pressley’s failed test likely occurred while he was with the Giants. Last year, Pressley was set to spend the year on the team’s practice squad until he was abruptly released in November.

The 26-year-old (27 in May) has already signed deals with five NFL clubs over the course of his career. Before joining the pro ranks, Pressley averaged an eye-popping 6.9 yards per carry and scored 35 rushing touchdowns for New Mexico.