The Titans are sniffing around the free agent pass-rushing market. The team brought in edge rusher Ryan Delaire for a workout, a source told Aaron Wilson of the Houston Chronicle (Twitter link). 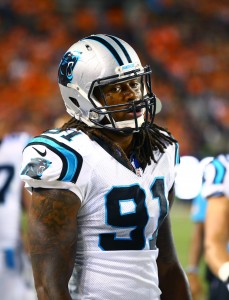 Delaire originally signed with the Buccaneers as an undrafted free agent back in 2015. After a brief stint on the Redskins’ practice squad, he was signed to the Panthers’ active roster. He appeared in nine games for Carolina as a rookie, racking up 2.5 sacks in a reserve role. The Panthers thought highly enough of him to make him one of their players activated from injured reserve in 2016, and he played in six games before going down with another injury.

He couldn’t get completely healthy, and was waived with a failed physical designation in 2017. After sitting out the entire 2017 season, he signed with the Colts last year. He was quickly cut and signed to the 49ers’ practice squad. He was briefly called up to the active roster and appeared in two games for San Francisco, failing to record any statistics. If Tennessee signs him it’ll just be as depth.