Following a busy day around the NFL, here are today’s minor moves:

Lions linebacker Trevor Bates is in hot water. Rocco Parascandola and Thomas Tracy of the New York Daily News report that the 25-year-old was arrested for skipping a cab fare in New York City last night. After refusing to be fingerprinted at the stationhouse, authorities say Bates punched an officer in the face. 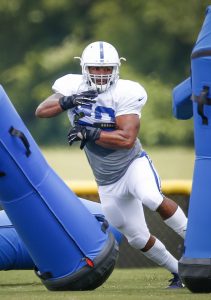 Cops subsequently subdued Bates, who was later taken to Elmhurst Hospital for a psychiatric evaluation. The player was reportedly calm when he was first arrested, but he became enraged while sitting in his holding cell (via Tina Moore and Amanda Woods of the New York Daily Post). Bates reportedly “didn’t like a sergeant standing nearby,” and that individual was released from a hospital after receiving stitches and being evaluated for a concussion.

Lions general manager Bob Quinn released a brief statement on the matter (via Justin Rogers of the Detroit News on Twitter):

“We are aware of the arrest of Trevor Bates earlier today in New York. We have not spoken to Trevor as of yet and are still in the process of gathering more information. The Detroit Lions will have no further comment at this time.”

The 2016 seventh-round pick out of Maine has bounced around the league a bit during his brief career, spending time with the Lions, Colts, Giants, and Patriots (with whom he won a ring with in 2017). Bates appeared in a career-high nine games with Detroit in 2018, compiling three tackles. The linebacker has a $570K cap number for the 2019 season.