Bennie and the Giants. On Monday, the G-Men re-signed wide receiver Bennie Fowler, bringing him back to the Meadowlands after a short hiatus (Twitter link via Pat Leonard of the Daily News). To make room, the Giants dropped linebacker Nathan Stupar.

Fowler was dropped recently after posting 12 catches for 99 yards through four games. The move helped them clear a spot for the return of Golden Tate, but they need Fowler back in their lives as receiver Sterling Shepard and tight end Evan Engram remain banged up.

The Giants are familiar with Fowler – he spent the 2018 season with the club, though he had just 16 grabs for 199 yards and one touchdown through ten games, mostly as a role player. Before that, Fowler spent four years in Denver.

The Giants fell to the Patriots on Thursday night, dropping them to 2-4 on the season. They’ll look to get things back on track this Sunday, when they face the Cardinals at Metlife Stadium.

The Giants have signed free agent linebacker Nate Stupar, according to a tweet from his agency. 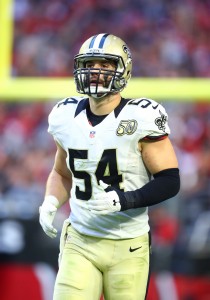 Stupar, 30, was released by the Saints earlier this week but quickly drew interest on the free agent market. Had Stupar not signed with New York, he had another visit lined up with an unidentified club, tweets Mike Triplett of ESPN.com.

Stupar entered the league as a seventh-round draft pick in 2012. He’s mostly served as a backup during his NFL career, but he’s played plenty of snaps on special teams, an area of great need for the Giants. New York ranked dead last in Football Outsiders’ special teams DVOA in 2017, but Stupar should be able to help the club improve.

Although he shouldn’t be expected to see much time on defense, Stupar is capable of playing inside linebacker in the Giants’ new 3-4 scheme. He’ll provide depth behind starters Alec Ogletree and B.J. Goodson.

Saints linebacker Nathan Stupar will miss the remainder of the 2017 season after tearing his ACL on Sunday, according to Herbie Teope of the Times-Picayune (Twitter link).

Stupar injured his knee while covering a punt, and special teams were a key area of focus for him during his time with New Orleans. In fact, Stupar hadn’t played a single defensive snap this year. He’d seen action on nearly half the club’s special teams plays, however, and helped the Saints to the No. 17 ranking in ST DVOA, a massive improvement from 2016.

Stupar has plenty of NFL experience under his belt, as he’s appeared in 63 games and made nine starts during his five-plus year pro career. He’s under Saints control through 2018, but given his age (29) and his cap number ($2.125MM), it wouldn’t be surprising to see New Orleans cut ties this offseason, as doing so would save the club $1.725MM in cap space.

Not much should change on the Saints’ defense as a result of Stupar’s injury, as Craig Robertson, A.J. Klein, and Manti Te’o will continue to see the most snaps. On special teams, the newly-signed Gerald Hodges and/or Adam Bighill — who was promoted from the practice squad over the weekend — could be deployed more frequently.

Though the Giants did express some interest in left tackle Ryan Clady before he was shipped from the Broncos to the Jets, talks never became serious because of the draft pick compensation required, according to Jordan Raanan of NJ.com. The Jets ultimately swapped a fifth-round pick for Clady and a seventh-rounder, a price that was apparently too steep for the Giants. Big Blue may have had more definitive interest in Clady had he been released by Denver, per Raanan.

Let’s take a look at a few more Giants note, all courtesy of Raanan…

The Saints announced that they have signed linebacker Nathan Stupar to a three-year deal. Stupar was non-tendered by the Falcons earlier this offseason.

The specials teams ace, originally selected by the Raiders in the seventh round of the 2012 draft, came to Atlanta prior to the 2015 season. In 2014, he appeared in 15 games for Atlanta and finished the season ranked second on the team with nine (seven solo) special teams tackles. In 2015, Stupar appeared in all 16 regular season games for Atlanta and mae three starts. In total, he had 31 tackles, one fumble recovery, and one defensive touchdown.