The Commanders have released offensive lineman Ereck Flowers, according to agent Drew Rosenhaus (Twitter link via Adam Schefter of ESPN.com). The move will allow Flowers to sign with any club, starting at 4pm ET/3pm CT today. 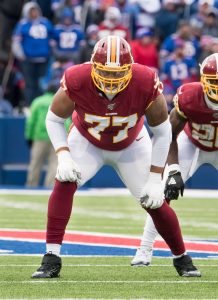 Flowers came to Washington last year via trade with the Dolphins. It was effectively a cap dump for the ‘Fins, as the deal was completed with a simple swap of late-round picks. For Flowers, it was a reunion and an opportunity to reprise some of his best career work in 2019. Playing as Washington’s left guard, Flowers excelled and parlayed his strong showing into a three-year, $30MM contract with Miami.

Flowers earned decent marks from Pro Football Focus while in South Beach. His 65.9 overall score had him tied as the No. 32 guard in the NFL in 2020. This past year, Flowers was up-and-down, allowing six sacks on the year. On the plus side, he ceded only two sacks.

Similar to his last foray into free agency, Flowers has an opportunity to cash in given the dearth of quality interior linemen across the league. While this year’s guard crop was stronger than most, many of this year’s biggest names have already come off of the board.

By cutting Flowers, Washington will clear an additional $10MM from their books. 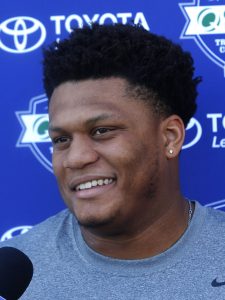 The Dolphins have agreed to trade Ereck Flowers to the Washington Football Team (Twitter link via NFL.com’s Ian Rapoport). The guard will head to D.C. in a swap of late-round picks.

The deal frees up cap room for the Dolphins, who will have to allocate lots of dollars to their oversized draft class. On Thursday, they’ll start things off with two first-round choices at No. 6 and No. 18 overall.

Meanwhile, Washington gets to reunite with a familiar face. Flowers couldn’t hack it as an offensive tackle in the NFL, but he has reinvented himself as a guard. In 2019, he parlayed a strong showing as Washington’s LG into a three-year, $30MM contract with the Dolphins last year. It was more money than anyone expected for Flowers, though there weren’t many quality lineman on the board. After the Redskins locked down Brandon Scherff and the Patriots took Joe Thuney off of the market with a surprise franchise tag, Flowers was looking better than ever to teams in need of interior help.

Flowers stayed on the interior in Miami, serving as their starting LG in all 14 of his games. He earned decent marks from Pro Football Focus — his 65.9 overall score had him tied as the No. 32 guard in the NFL.

With two years to go on his deal, the former first-round pick is set to earn $9MM in 2021.

The Dolphins have agreed to sign Ereck Flowers, according to ESPN.com’s Adam Schefter (on Twitter). Once finalized, it’ll be a three-year deal worth $30MM with $19.5MM fully guaranteed.

Flowers, who floundered in his early years with the Giants, was not expected to find free agent riches at the outset of the offseason. However, the dearth of quality offensive line help around the league bolstered his market tremendously. Lately, we’ve heard rumors that Flowers could fetch $10MM/year on his next deal. That was indeed the case, and the Dolphins will be the team to pay out that contract.

Last year, Flowers earned $3.25MM with the Redskins. Playing at guard, Flowers started in all 16 games and surprised many with his performance. After the Redskins locked down Brandon Scherff and the Patriots took Joe Thuney off of the market with a surprise franchise tag, Flowers was looking better than ever to teams in need of interior help.

The deal brings the Miami native and former Hurricane back to his old stomping grounds. Meanwhile, the Dolphins get a talented lineman who – in theory – could offer support at multiple positions.

Ereck Flowers has had a bumpy journey in the pros, but it looks like he might’ve found a permanent home. The Redskins want to bring back the impending free agent, new head coach Ron Rivera told Larry Michael on Redskins Nation, via JP Finlay of NBC Sports.

We heard recently that the ‘Skins were planning on franchise-tagging right guard Brandon Scherff, and Rivera confirmed that he wants both of the guards back. The Giants drafted Flowers ninth overall back in 2015, and it wasn’t long before he was labeled a bust. After starting at least 15 games in each of his first three seasons with very poor results at both tackle positions, Flowers was released midway through his fourth.

He latched on with the Jaguars and started seven games with them in 2018, again struggling mightily. Then he signed a one-year deal with Washington last offseason, and the team moved him to guard during training camp. He thrived in the new position, and started all 16 games.

As for what it will take to re-sign Flowers, Finlay writes that it will probably be more than double the $3.25MM he earned last season. Rivera seemed to be pretty confident about a deal getting worked out and the state of his offensive line, saying “once we get that situation figured out, we will have four of the five (starters) that we know what’s going to happen” with. The one question mark in that scenario, of course, would be left tackle Trent Williams, who was recently given permission to pursue a trade.

Not much has transpired on the Donald Penn front since the Raiders released him. Trent Williams‘ holdout looks to have changed that. The Redskins will host the former Raiders and Buccaneers tackle on a visit, Ian Rapoport of NFL.com tweets. Penn will work out for the team, John Keim of ESPN.com tweets. 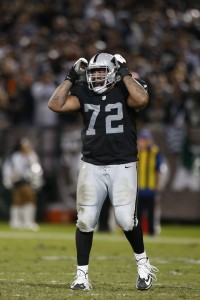 The Raiders cut Penn more than four months ago, and other than some interest from the Texans, the 36-year-old blocker has experienced a quiet free agency stay. Washington, though, may be ready to move on bringing in a Williams replacement/stopgap. It could also be an attempt to bring the holdout back into the fold.

Washington expressed interest in Penn during his 2014 free agency, Mike Jones of USA Today tweets. Redskins president Bruce Allen was with the Bucs when they drafted Penn.

Penn profiles as a far more proven player than Ereck Flowers, who slid over to left tackle during Washington’s minicamp. Flowers has struggled at tackle throughout his career, and although the Redskins were planning to try him at guard, it looks like they will keep him on the edge for the time being, Jay Gruden said (via Les Carpenter of the Washington Post, on Twitter).

The Raiders deployed Penn as their left tackle starter for four seasons, then moved him to the right side for what turned out to be a short stay. An early-season injury shelved Penn for most of the 2018 season. Prior to that, he had started 174 of a possible 176 regular-season games since entering the league in 2007.

While the Williams situation is unique, based on the 10th-year tackle being at odds with the Redskins because of their handling of an injury, Penn has been through multiple holdouts in recent years. It’s interesting another standout’s absence could create an opportunity for Penn.

It makes sense for the Redskins to protect themselves at left tackle, but Penn coming in would point to the team considering a Williams trade. The Redskins can begin fining their nine-year left-edge blocker, who also wants a new contract, for camp absences. Williams’ contract demand also comes after he has missed extensive time in recent seasons. Regardless, Washington’s left tackle spot remains in flux. Penn’s involvement complicates this situation further.