The Jaguars have placed tight end Dan Arnold on the injured reserve list, per a club announcement. This was the expected move after Arnold was diagnosed with a grade 2 MCL sprain on Monday. 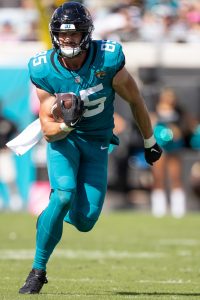 Technically, Arnold would be eligible to return after three weeks on IR. However, given the 4-6 timeline for his recovery, this likely spells a season-ender for the 26-year-old.

The Jaguars traded for Arnold (and a third-round pick) in late September, in exchange for former first-round choice C.J. Henderson and a fifth-round selection. Since then, the tight end has reeled in 28 catches for 304 yards in eight games. Coupled with his early Carolina line, he’s recorded 35 grabs for 408 yards in eleven contests. Even in this injury-shortened season, that’s roughly in line with his entire 2020 from Arizona.

At 2-9, the Jaguars have little reason to rush the young tight end back to the field. Thanks to his two-year, $6MM deal, he remains under contract with Jacksonville through 2022.

Dan Arnold may be done for the year. The Jaguars tight end has been diagnosed with a grade 2 MCL sprain that will sideline him for 4-6 weeks (Twitter link via NFL.com’s Ian Rapoport). 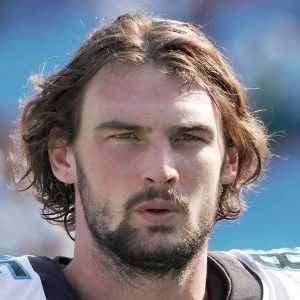 The Jaguars acquired Arnold in late September, shipping former first-round pick C.J. Henderson and a fifth-round choice to the Panthers in exchange for the tight end and a third-round pick. Since then, he’s been a bright spot for the Jaguars in an otherwise trying year.

Through eleven games (three with the Panthers and eight with the Jags), Arnold has 35 grabs for 408 yards. That’s roughly in line with his entire 2020 with the Cardinals — 31 grabs for 438 yards and four touchdowns. On the plus side, the Jaguars still have Arnold under contract for 2022, thanks to the reasonable two-year, $6MM deal he inked with Carolina earlier this year.

The Jaguars, sans Arnold, will head west this week to face the Rams. At 2-9, they aren’t playing for much, so it’s unlikely that Arnold will return before the year is through.

The Jaguars have agreed to trade former first-round pick C.J. Henderson and a fifth-round choice to the Panthers (Twitter link via NFL.com’s Ian Rapoport). In return, the Panthers will send tight end Dan Arnold and a third-round pick to the Jaguars. 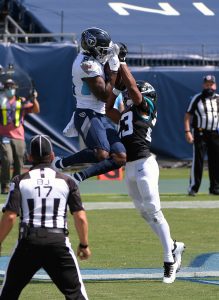 Henderson will provide immediate help in the secondary, since the Panthers are going to be without Jaycee Horn for a while. Through his first three pro games, the No. 8 overall pick showed promise as he notched three tackles and one interception to his credit. Henderson, meanwhile, has struggled to find his footing as a pro.

The Jaguars’ old regime made Henderson the No. 9 overall pick in 2020. He went on to appear in just eight games, due to a reserve/COVID-19 list stint and shoulder labrum surgery. Reportedly, even when he was there, the ex-Florida Gator appeared to be disinterested at Jags practice. Still, teams were interested in acquiring him this summer, including the Saints.

With Henderson out of the picture, the Jaguars will move forward with Shaquill Griffin and Tre Herndon as their boundary corners with Chris Claybrooks in the slot. Meanwhile, Urban Meyer & Co. will focus on developing rookie second-rounder Tyson Campbell for a larger role.

On the other side of the ball, Arnold provides Trevor Lawrence with an intriguing weapon. Last year, Arnold finished with 31 grabs for 438 yards and four touchdowns for the Cardinals. He went on to sign a two-year, $6MM deal with the Panthers, but he’s seen just eleven targets through three games while rookie Tommy Tremble has gotten more of the attention. 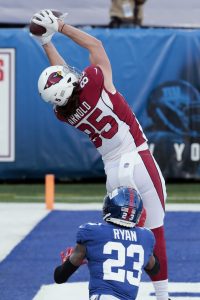