The Panthers could be without Jaycee Horn for a while. The early word is that the cornerback has multiple broken bones in his foot, which would require surgery and two to three months of recovery (Twitter link via NFL.com’s Ian Rapoport).

Horn broke three bones in his foot, Matt Rhule said Friday, and the rookie and his family will determine his plans from here. Surgery is certainly on the table. It could well mean Horn’s initial NFL season will end after three games. 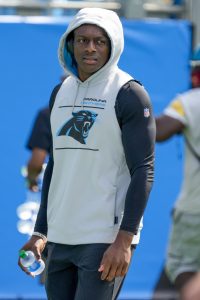 A late-season return represents Horn’s best-case scenario. Horn went down on a non-contact play Thursday night and had to be carted off. He was unable to put weight on his leg, an immediate sign of something serious. Meanwhile, the Panthers also saw star running back Christian McCaffrey and safety Juston Burris exit early.

Horn, the first cornerback drafted this year, finished his Ohio State run with two interceptions and six passes defended in just seven games. Through his first two pro games, the No. 8 overall pick has three tackles and one interception to his credit.

He’ll likely land on the injured reserve list, elevating veteran Rashaan Melvin to a larger role. Carolina, however, is likely to have A.J. Bouye in action soon. After missing two games due to a PED suspension, Bouye missed Thursday’s game with an undisclosed injury. Rhule expects Bouye to be ready for Week 4, Joe Person of The Athletic tweets.