Christian McCaffrey is out for the rest of tonight’s game against the Texans. The running back left the game during the second quarter of tonight’s contest and will not return, according to the broadcast (and passed along by ESPN’s Field Yates on Twitter). 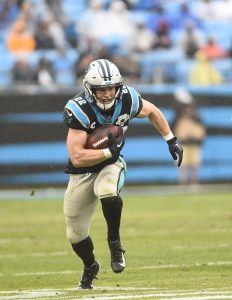 The star running back is dealing with a hamstring injury, according to the team. McCaffrey bounced on and off the field for much of the first quarter-plus, and he remained in the medical tent for some time after exiting during the second quarter.

Following a historic 2019 campaign where McCaffrey finished with 2,392 yards from scrimmage and 19 touchdowns, the running back was limited to only three games in 2020 after suffering a shoulder injury. He looked fully recovered through the first two weeks of the 2021 season, collecting 324 yards from scrimmage on 59 carries. The 25-year-old had another 40 all-purpose yards on nine touches before leaving tonight’s game.

McCaffrey‘s absence may end up being inconsequential during Thursday’s game against the lowly Texans. However, it will be tough for the surprising Panthers to overcome a long-term McCaffrey absence. Chuba Hubbard is next in line for carries, but the rookie fourth-round pick has only seen time in 26 offensive snaps through two weeks. The team is also rostering Royce Freeman on the active roster, and they could turn to practice squad backs Rodney Smith or Spencer Brown.