Kingsley Keke was scheduled to start his Texans career this fall, but he will suiting up elsewhere. The Texans are cutting the 25-year-old, reports Aaron Wilson of Pro Football Network (on Twitter).

Keke, a fifth-round pick of the Packers in 2019, took on an increasingly large role in Green Bay over his three seasons there. He made 17 starts between 2020 and 2021, totalling 44 tackles and 6.5 sacks during that span; those totals contributed to consistent PFF grades in the 60s. His time with the team came to an abrupt end, however, and he was waived in January.

The Texans claimed Keke off waivers not long after, which pointed to him becoming another young piece to Houston’s rebuilding roster. However, as Wilson notes, he was due a base salary of just over $2.5MM as a result of playtime escalators, making him an expensive rotational option. Releasing him does not incur any dead cap charge for the Texans.

Houston drafted Thomas Booker in the fifth round, and has signed Damion Daniels as a UDFA to add cheaper options at the position. Wilson does note, though, that the Texas A&M product is expected to have a market for his services as he hits free agency for the first time in his career.

The Packers have moved one step closer to wrapping up their 2019 rookie class, as the club recently announced it has signed fifth-round defensive tackle Kingsley Keke and sixth-round cornerback Ka’dar Hollman. 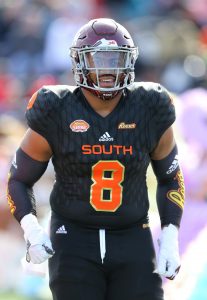 Keke (6’4″, 305) projects as an interior rusher for the Packers, and his performance at the Senior Bowl was impressive enough for Mike Renner of Pro Football Focus to label the Texas A&M product one of the steals of the 2019 draft. During his final season with the Aggies, Keke posted 7.5 sacks and 11 tackles for loss while ranking 16th in among all NCAA interior defenders in run-stop percentage. He might not see much playing time during his first season in Green Bay, as he’s currently behind Mike Daniels, Kenny Clark, Dean Lowry, and Montravius Adams on the team’s defensive line depth chart.

Hollman may have an even more difficult path to playing time than Keke, as he’s stuck behind Jaire Alexander, Kevin King, Josh Jackson, and a host of other defensive backs. However, Hollman does possess elite athletic traits, as his 9.23 Relative Athletic Score places him near the upper echelon of historical cornerback averages. As Kent Lee Platte of SB Nation recently noted on Twitter, Green Bay has been targeting prospects with excellent athletic testing results in each of the past four drafts.