The Colts added some depth to their secondary Tuesday. They reached an agreement with safety Armani Watts, per Jim Irsay (on Twitter). 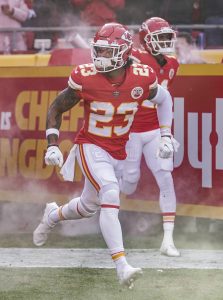 A former fourth-round pick, Watts worked primarily as a special-teamer in four seasons with the Chiefs. The Texas A&M product missed just one Chiefs game over the past three seasons, playing at least 70% of Kansas City’s special teams plays in each of the past two.

Watts stands to replace George Odum as a Colts backup safety and steady special-teamer. Odum signed with the 49ers earlier this offseason. Odum, who started seven games at safety last season, earned All-Pro acclaim as a special-teamer in 2020. Watts, 26, made nine tackles during the Chiefs’ three-game playoff run last season.

The Colts have Julian Blackmon and Khari Willis positioned as their safety starters. The former is coming off a torn Achilles, magnifying Indianapolis’ safety depth. The Colts used Andrew Sendejo as a 10-game starter last season; the 12-year veteran is a free agent.

Kansas City is retooling on its back end, having let Watts and longtime contributor Daniel Sorensen walk in free agency. The Chiefs are likely to separate from Tyrann Mathieu as well, having signed Justin Reid early in free agency. Juan Thornhill is going into a contract year.

The Chiefs formally placed guard Laurent Duvernay-Tardif and defensive back Armani Watts on injured reserve. In a related move, the club brought back outside linebacker Frank Zombo.

Duvernay-Tardif was injured in the fourth quarter of the Chiefs’ 30-14 win over the Jaguars. As coach Andy Reid explained, the fibula is a non-weight bearing bone, so LDT should be able to heal up before the end of the season. Per league rules, he’ll have to spend at least eight weeks on the sidelines, meaning that he cannot return until Week 14, when the Chiefs face the Ravens. The Chiefs have their bye in Week 12, so Duvernay-Tardif might only miss seven games in total.

Watts, a fourth-round pick in this year’s draft, recorded one sack and two total tackles in five games this year. He’s just the latest Chiefs safety to succumb to injury thanks to a groin tear suffered against the Jaguars.