Von Miller‘s first season in Buffalo ended on Thanksgiving when he suffered a torn ACL. Unsurprisingly, Bills general manager Brandon Beane indicated that the veteran linebacker isn’t a lock to be ready for the 2023 season opener. Beane told reporters that it’s too early to know if Miller will be available for the entirety of the 2023 season, but the GM did express optimism that Miller should play a “good portion” of the year (per ESPN’s Alaina Getzenberg on Twitter).

When Miller first suffered the injury on Thanksgiving day, he was expected to miss only a handful of games. However, exploratory surgery revealed that the linebacker had in fact suffered a torn ACL. The injury didn’t only prematurely end his 2022 season, but it also put the start of his 2023 campaign in doubt. Miller previously missed the entire 2020 season while recovering from a dislocated peroneal tendon.

After inking a six-year, $120MM deal with the Bills last offseason, Miller proceeded to start all 11 of his games for Buffalo. Following two-straight seasons of single-digit sack totals, Miller was well on his way to get back to that double-digit mark in 2022. He ultimately finished the season with eight sacks and 12 QB hits.

More notes out of Buffalo…

Bills cornerback Tre’Davious White will start training camp on the PUP list, as Ian Rapoport of NFL.com tweets. That does not come as much of a surprise given that White sustained a torn ACL in November. 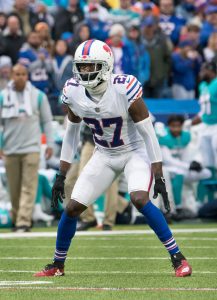 Rapoport does note that White is “in a good place” in his recovery. It is still unclear when the two-time Pro Bowler will be able to return to the field, and he is a candidate to open the season on IR. If he is not ready to go for Week 1, Buffalo will likely deploy first-round rookie Kaiir Elam and Dane Jackson — who acquitted himself well when filling in for White last year — as its starting boundary corners.

White, who had signed a four-year, $70MM extension a little more than a year before suffering the ACL tear, was in the midst of a terrific 2021 campaign. His yards-per-completion (9.9) and yards-per-target (5.2) figures represented career-best marks, and he was surrendering a meager 60.8 QB rating on passes thrown in his direction. He had also posted 41 tackles, one forced fumble, six passes defensed, and one interception. The Bills have legitimate championship aspirations, and White’s healthy return will be instrumental to the club’s push for its first Lombardi Trophy.

Meanwhile, offseason acquisition Rodger Saffold will open camp on the NFI list after injuring his ribs in a recent car accident, per Joe Buscaglia of The Athletic (via Twitter). Head coach Sean McDermott did not put a timeline on Saffold’s return, saying only that the 34-year-old will return “in due time.”

Saffold spent the last three seasons with the Titans and earned the first Pro Bowl nod of his career in 2021. Tennessee released him in a cost-cutting move in March, and he signed with the Bills several days later. He projects as Buffalo’s starting left guard.

Fellow guard Ike Boettger, who started 10 games for the Bills last season, finds himself on the PUP list after sustaining an Achilles tear towards the end of the 2021 season. DT Eli Ankou, a reserve/futures player who notched one sack and nine tackles in five games for Buffalo last year, joins him and White on that list.

James White did not make it into last season’s October docket, suffering a hip injury in Week 3. That issue did not deter the Patriots from giving the veteran passing-down back a fourth contract — two years, $5MM — this offseason, but it very well might keep White off the field until October of this year. The ninth-year veteran has not been fully cleared, and Mike Reiss of ESPN.com envisions the Patriots being cautious to start the season by using the reserve/PUP list in this case. New England has Damien Harris and Rhamondre Stevenson back as its primary backfield cogs, and the team doubled up on runners in the draft (Pierre Strong in Round 4 and Kevin Harris in Round 6). White, 30, going over a year without playing would be somewhat concerning, but he is the team’s longest-tenured offensive player and still should be on track to play a significant role in its second Mac Jones-conducted attack.

Rodger Saffold is joining up with the Bills (Twitter link via Adam Schefter of ESPN.com). On Monday, the former Titans guard agreed to a brand new deal with Buffalo. It is a two-year deal in name only, with Saffold indicating (via CBS Sports’ Josina Anderson, on Twitter) the second year is a void year for cap purposes.

The 33-year-old had one year to go on his Titans contract, with a scheduled cap hit of $12.8MM. If he had still been on the roster five days after the beginning of free agency next week, he would have received a $1MM roster bonus. Instead, the Titans elected for $10.4MM in cap room with a more modest $2.375MM dead money hit.

After nine years spent with the Rams, the former second rounder inked a four-year, $44MM deal to come to Nashville in 2019. He missed a total of three games in three campaigns with the Titans, and even earned his first career Pro Bowl nod in 2021. On the other hand, PFF assigned him an underwhelming grade of 68.8.

Despite his age, Saffold profiled as one of the top LGs on the open market. Now, he’ll help to protect star quarterback Josh Allen and work alongside middle man Mitch Morse, who agreed to a fresh two-year deal this week.

The Titans are continuing to cut costs along the offensive line. Per Adam Schefter of ESPN, the team is releasing left guard Rodger Saffold (Twitter link). 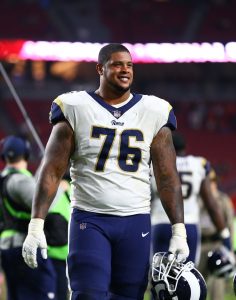 The 33-year-old had one year remaining on his contract, with a scheduled cap hit of $12.8MM. If he had still been on the roster five days after the beginning of free agency next week, he would have received a $1MM roster bonus. The move will incur $2.375MM in dead money, but save the Titans just over $10.4MM in cap room.

After nine years spent with the Rams, the former second rounder signed a four-year, $44MM deal to come to Nashville in 2019. He missed a total of three games in three campaigns with the Titans, and even earned his first career Pro Bowl nod in 2021. On the other hand, PFF assigned him an underwhelming grade of 68.8.

After letting go of Lamm and now Saffold, the Titans are back in the black with regard to the salary cap. They are presently listed as having $3.75MM in breathing space, which makes room to accommodate Harold Landry‘s new deal, but doesn’t leave much to find a replacement. Center Ben Jones is also set to become a free agent, so the team could very well be on the lookout for multiple new starters along the interior of the offensive line.

Despite his age, Saffold will now become one of the top LGs on the open market. Other big names at the position include Laken Tomlinson, Andrew Norwell and Quinton Spain. With a number of teams in need of at least shoort-term health on their offensive fronts, Saffold shouldn’t be out of work for very long. 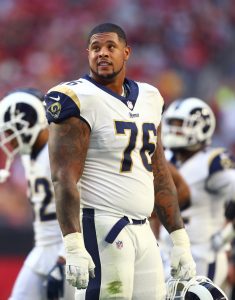