The Bills and Tre’Davious White have struck agreement on a four-year contract extension, as Ian Rapoport of NFL.com tweets. The pact is worth $69MM and could potentially reach a round $70MM by way of Pro Bowl incentives. Most importantly, the deal includes $55MM in guaranteed cash for the star cornerback, though it’s not immediately clear if that’s fully guaranteed at signing. 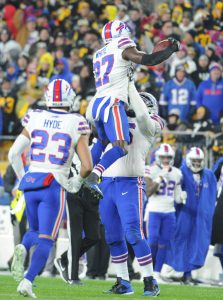 The deal has been in the works for a while. Previously, White was set to earn $1.8MM in base pay this year before playing out his $10.2MM fifth-year option in 2021. As one of the league’s premier defenders, White was understandably anxious to lock in his payday. Last year, White led the NFL with six interceptions, giving him a dozen picks over the last three years in total.

White’s $17.25MM/year average positions him as the highest-paid cornerback in the league, edging out Byron Jones‘ $16.5MM average annual salary. It’s a big investment, but it’s well worth it for a truly elite cornerback who only just turned 25 in January.

Bills fans may never get over losing out on Patrick Mahomes in the 2017 draft, but White is quite the consolation prize. The No. 27 overall pick has allowed only five touchdowns since entering the league and his 60.6 passer rating ranks as the second-highest of any player over the last three seasons, per Pro Football Focus. After briefly considering an opt out, White is ready to lead the charge for the Bills in 2020 – and beyond.