Darren Waller has not yet returned from the injury he suffered on Thanksgiving, but interim HC Rich Bisaccia said the Pro Bowl tight end was close. A Waller re-emergence may have to wait another week. 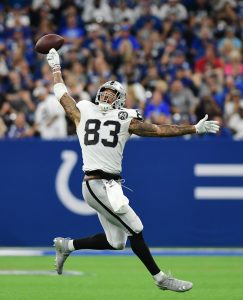 The Raiders are placing Waller on the reserve/COVID-19 list, Anthony Galaviz of the Fresno Bee tweets. Despite the NFL changing its coronavirus protocols again Tuesday, this transaction points to Waller missing another game.

Players can return after five days, regardless of vaccination status, if they are asymptomatic. Waller is vaccinated, per the Las Vegas Review-Journal’s Vincent Bonsignore (on Twitter). Vaccinated NFLers who test positive can come back sooner, but that has been a high hurdle for most this season. Coupled with Waller’s IT band injury, his odds of playing against the Colts on Sunday are slim.

Waller has missed Las Vegas’ past four games. The IT band injury has caused pain in Waller’s upper leg during his rehab, Jeremy Fowler of ESPN.com notes. This has slowed his return. The Raiders never placed Waller on IR, indicating they hoped he could come back within three weeks. Instead, he is looking at a likely five-game absence.

While the team has rallied over the past two weeks to move to 8-7, aerial success has not come easy. Waller has 53 catches for 643 yards and two touchdowns this season.