Bills To Work Out Matt Tobin

Free agent offensive tackle Matt Tobin is scheduled to work out for the Bills, according to Mike Reiss of ESPN.com (on Twitter). Tobin, a vested veteran, was released by the 49ers earlier this week, making him a free agent.

Tobin spent much of the offseason and training camp with the Patriots, and as Reiss notes, he would be a logical fit for New England given their injuries at tackle. However, their AFC East rivals could pounce first.

The Bills are in need of help across the board after getting drummed by the Ravens in their opener and falling to the Chargers on Sunday. Buffalo’s pass protection could use some help in particular, and Tobin could be of use in that area.

Tobin, 30, boasts 57 games of pro experience with the Eagles and Seahawks, but he was inactive for each of the 49ers’ first two games. 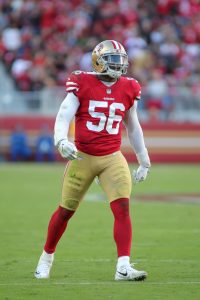 Foster never actually suffered any legal consequences as the result of several off-field incidents during the offseason, but the NFL still suspended him two games for violating the league’s conduct and substance abuse policies. The 31st overall pick in the 2017 draft, Foster was outstanding in his 10-game rookie season, posting 59 tackles in total. He should slide back in as San Francisco’s weak side linebacker while veteran Malcolm Smith moves to the strong side.

Tobin, 30, boasts 57 games of pro experience with the Eagles and Seahawks, but he’d been inactive for each of the 49ers’ first two games. He signed with the Patriots this offseason but was released during final cutdowns, and signed with the 49ers two days later.

The free agency defection of Danny Amendola, the trade of Brandin Cooks, the releases of Kenny Britt and Jordan Matthews, and potentially the advancing age of a now-32-year-old Julian Edelman leave the Patriots somewhat vulnerable at wide receiver. Might the NFL’s most trade-happy team consider one to bolster perhaps Tom Brady‘s final receiving corps? Mike Florio of Pro Football Talk suggests (via NBC Sports Boston) one that would be quite the blockbuster, even if it could be a tad of a reach.

Describing “a weird sense coming out of Denver as it relates to Demaryius Thomas,” Florio posits a Thomas-to-the-Patriots trade. While prefacing this with the fact that said weird sense might not end up being meaningful regarding Thomas’ Broncos status, Florio points out Patriots OC Josh McDaniels drafted Thomas in 2010 and the Pats suddenly need receivers more than the Broncos appear to. That said, the 30-year-old wideout is one of the best players in Broncos history, and John Elway trading a key player to the Patriots may not be realistic. The Broncos have liked what they’ve seen from Courtland Sutton and fourth-rounder DaeSean Hamilton this preseason, and Denver cut the cord on Super Bowl starter T.J. Ward to save money after the 2017 preseason. But the Broncos picked up Thomas’ 2018 option — he’s attached to an $8.5MM base salary and $12MM cap number — and have struggled for years to develop receiving depth. Thomas is, however, due a non-guaranteed $14MM next season, the final year of his contract. So, he very well could be entering the last season of his Broncos tenure.

Tobin spent 2017 as a backup left and right tackle with Seattle after being acquired from the Eagles in the offseason. He appeared in 15 games in 2017, and has played in 57, including 21 starts, in five NFL seasons.

The Eagles and Seahawks have completed a trade. The Seahawks will acquire tackle Matt Tobin and a 2018 seventh-round pick in exchange for a 2018 fifth-round pick. 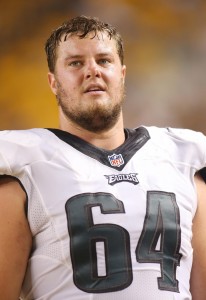 Tobin, 27, saw significant playing time for the Eagles in 2014 and 2015. Last year, he appeared in 12 games before he landed on IR in December. The 6’6″ lineman was on the field for 101 offensive snaps last year (35 passing, 65 running) and earned a substandard 49.0 overall grade from Pro Football Focus.

Presumably, the former UDFA has healed up from last year’s knee injury, so he might be able to push Rees Odhiambo for the starting job vacated by George Fant‘s season-ending injury. If he falls short in that battle, Tobin’s versatility will work in his favor with experience at both tackle and guard.

The Seahawks still have to figure out their left tackle situation, but they project to start Luke Joeckel, Justin Britt, Oday Aboushi, and Germain Ifedi at the remaining O-Line spots.