The Patriots announced that they have re-signed punt returner Bernard Reedy. Reedy will be eligible to play in this weekend’s AFC title game against the Jaguars. 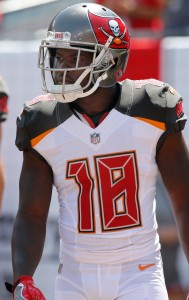 The Pats will have to make a roster move in order to bring Reedy back into the fold. That will likely be accomplished by placing cornerback Jonathan Jones on IR. On Wednesday afternoon, New England opted against activating wide receiver Malcolm Mitchell from injured reserve, which cleared the way for Reedy to rejoin the team.

The Toledo product caught on with the Pats’ taxi squad in November after the Bucs ended his lengthy Tampa Bay stay. Despite being with the Bucs since the 2015 season, the former 2014 UDFA only saw live action in ’17.

The Patriots have signed former Browns wide receiver Kenny Britt to a two-year deal, as first reported by Field Yates of ESPN.com (on Twitter) and Ian Rapoport of NFL.com (Twitter link). The team confirmed the move in a press release on Wednesday.

Britt visited the Pats on Tuesday and it didn’t take long for the two sides to get down to brass tacks. Rapoport hears that New England was Britt’s preferred landing spot. 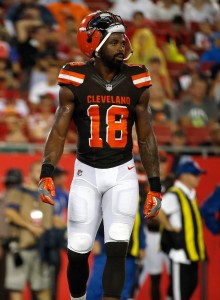 The Patriots stood out as a strong contender to land Britt after he cleared waivers. After all, the Patriots have an affinity for ex-Rutgers players (likely fueled by their connection to former RU head coach Greg Schiano) and they have a clear need at receiver with multiple injuries in that unit.

Bill Belichick also has a track record for getting the most out of players with perceived attitude problems. Back in 2007, many in the football world figured that Randy Moss‘ best days were behind him after a rocky stint in Oakland. For the low price of a fourth-round pick, the Patriots wound up with one of the game’s most lethal offensive weapons. Britt does not have the talent of Moss in his prime, but he has demonstrated game-breaking ability in the past. Britt was an abject bust for the Browns, and an expensive one at that. Still, he’s just one year removed from a 1,000+ yard campaign with the Rams.

If he can quickly familiarize himself with the playbook, Britt could be in for a prominent role right off of the bat. Top targets Malcolm Mitchell and Julian Edelman have been parked on IR, leaving Britt an opportunity to crack the rotation. Brandin Cooks, Chris Hogan, Danny Amendola, Phillip Dorsett, and Matt Slater currently stand as the team’s top five receivers.

The Patriots, who fell to 10-3 after being upset by Miami, are seeking to lock down a first-round bye in the final three games of the season. Meanwhile, Britt’s former team continues to look for its first win of the 2017 season.