The Niners took Garnett No. 28 overall in 2016, but he never lived up to his pre-draft hype. The Stanford product started in 11 of his 15 games as a rookie, but failed to impress. Then, knee surgery wiped out his 2017 season and he played in just seven games as a reserve in 2018. The Niners cut him before 2019, and his ensuing workout tour didn’t result in a contract. The Lions picked Garnett up in February, but they dropped him last week as they work towards final cuts.

Steinmetz has been similarly dogged by injuries. His 2019 was wiped out by a broken ankle. The Texans dropped him recently, making him a free agent.

In other Washington Football Team news, the club has activated quarterback Alex Smith. The QB will participate in full-pad work and he could see the field this year if likely starter Dwayne Haskins falters.

Dieugot Joseph hasn’t had a chance to see the field for a regular season game during his brief career, but the lineman is apparently generating interest as a free agent. Aaron Wilson of the Houston Chronicle reports (via Twitter) that Joseph is set to visit with the Redskins and Falcons this week. 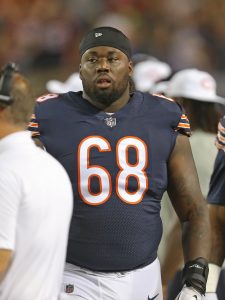 The FIU product went undrafted during the 2017 draft, but he quickly caught on with the Bears. He hung around with Chicago’s practice squad until mid-September, when the Ravens signed him to their active roster. The offensive tackle joined the Vikings towards the end of that campaign, earning him an eventual reserve/future contract.

Joseph was released by Minnesota last preseason, and he spent the majority of last season on the Jets’ practice squad. He inked a futures contract with the team in December, but he was let go by the organization earlier this month.

The Falcons have done plenty to revamp their offensive line this offseason. The team added two rookie linemen during the first round of the draft (Chris Lindstrom, Kaleb McGary), and they also added a number of free agents (a grouping that includes James Carpenter and Jamon Brown). Meanwhile, the Redskins haven’t done a whole lot to add to their offensive line corps; the team signed free agent Ereck Flowers, and they also added a pair of rookie linemen during the draft.