Nick Bellore has agreed to a brand new deal with the Seahawks, as Mike Renner of Pro Football Focus tweets. The signing has also been confirmed by NFL.com’s Ian Rapoport (Twitter link). 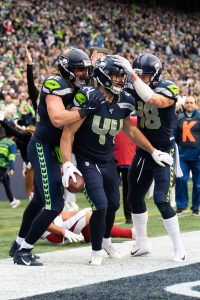 Bellore, 32 in May, has spent the last two seasons in Seattle. Even as teams around the league have de-prioritized the position, Bellore’s blocking has been highly valued in the Seahawks offense. His return should go a long way towards appeasing Russell Wilson, who is reportedly dissatisfied with the team’s efforts to protect him in the pocket.

Bellore spent much of his career at linebacker and saw significant playing time for the 49ers in 2016. That year, he made ten starts in their 3-4 scheme and registered 83 stops and one sack in total. Then, in Detroit, he went to the other side of the ball, where he had a knack for clearing lanes. Seattle used a fullback on just 8% of its plays in 2018. That changed in 2019 when Pete Carroll signed Bellore to a two-year, $2.23MM deal.

This Bills regime souring on Doug Whaley second-round pick Shaq Lawson could open the door to interesting trade talks as the season approaches. Still just 23, Lawson was a highly touted prospect at Clemson, which has produced some standout edge defenders in recent years. The Bears would be a reasonable landing spot for Lawson, Michael Walton of NBC Sports Chicago writes. Mostly going on Vic Fangio‘s ability to coax quality play from defenders, Walton writes Lawson would be an intriguing buy-low bet. He has two years remaining on his contract, and the Bears are somewhat thin on the edge behind Leonard Floyd. Lawson, though, has struggled as an NFLer in both the 3-4 and 4-3 schemes. Last season, Pro Football Focus did not view him as a strong pass rusher but did grade him as one of the better run defenders on the edge.

Here’s the latest from the NFC North, shifting to the Vikings’ linebacker situation. 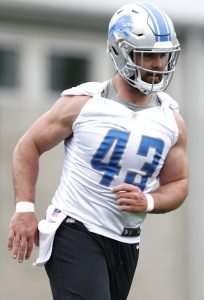 While Bellore is a linebacker in title, he was essentially a special teams-only player in 2017. The 28-year-old Bellore played only 108 defensive snaps a season ago, but saw nearly triple that action on special teams. Detroit general manager Bob Quinn has shown a willingness to pay for ST prowess in the past, and the Lions finished fifth in special teams DVOA last season.

Every one of Detroit’s free agent forays has been on the defensive side of the ball thus far, as the club has signed linebackers Devon Kennard and Christian Jones, plus re-signed defensive backs Nevin Lawson and Tavon Wilson.