The Vikings are eyeing some offensive line reinforcement. ESPN’s Courtney Cronin reports (via Twitter) that the team worked out offensive linemen Russell Bodine and Marcus Martin.

Bodine, 27, has generally played center throughout his career. The 2014 fourth-rounder spent the first four seasons of his career with the Bengals, starting all 64 of his appearances. He signed a two-year deal with the Bills during the 2018 offseason, and he proceeded to appear in 10 games (10 starts) for Buffalo. He was traded to the Patriots back in August, but he was released a week later.

Martin, a 2014 third-round pick, has bounced around the league a bit since his three-year stint with the 49ers. The 25-year-old has 26 career games (24 starts) under his belt, but he hasn’t seen the field since the 2016 campaign. The offensive guard signed with the Seahawks this past offseason, but he was released by the team at the end of the preseason.

The Vikings recently placed Brett Jones on the injured reserve, but the center had only played a limited role with the organization. The Vikings didn’t play this past weekend, but Josh Kline was forced out of the lineup for Week 11 as he recovered from a concussion.

The Vikings also worked out a pair of running backs in Johnny Stanton and Ryan Yurachek. Stanton had a previous stint with the organization, with the collegiate quarterback trying his luck at fullback. Yurachek spent this past preseason with the Cowboys. 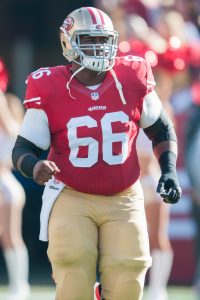 A former multiyear 49ers starter, Marcus Martin hasn’t played since the 2016 season. But the Cowboys signed the offensive lineman in hopes he could commandeer one of their backup jobs.

Those plans may not come to fruition. The veteran interior lineman suffered a toe injury during Dallas’ preseason opener Thursday night, and ESPN.com’s Todd Archer reports Martin will require surgery. And it could sideline him for a while.

Martin did not suffer a toe fracture, per Calvin Watkins of The Athletic (on Twitter), but instead tore a ligament in his right big toe, per Archer. La’el Collins suffered a similar injury in 2016 and spent the final three months of the season on IR.

The Cowboys believed Martin could serve as a backup interior lineman behind Zack Martin, Travis Frederick and Connor Williams, per Archer, but this certainly alters those plans. Joe Looney still resides as a key Cowboys backup, and his role now becomes more important after this setback. Martin, 24, was no lock to make the team, but this affects Dallas’ depth.

The former 2014 third-round pick finished the 2016 season on the 49ers’ IR before being waived a few months later. Marcus Martin signed with the Cowboys in March.

It looks as though the Cowboys will be further reinforcing their offensive line, as Ian Rapoport of NFL.com tweets that the club is expected to sign free agent offensive lineman Marcus Martin. It was reported earlier this month that Martin would be visiting the Lions and Cowboys, and he ultimately chose Dallas.

The 49ers selected Martin, a USC product, in the third round of the 2014 draft, and he spent the first three seasons of his career with San Francisco. He started 14 games in 2015, but he managed only four appearances (two starts) in 2016 before landing on injured reserve. The 49ers placed him on waivers last offseason, and although he was claimed by the Browns, he never suited up for Cleveland.

Still, he is just 24 years old and is capable of playing both guard and center. He will work as a quality reserve for a Cowboys line that just got even stronger yesterday with the addition of offensive tackle Cameron Fleming.

Versatile offensive lineman Marcus Martin has a pair of meetings coming up. Mike Garafolo of the NFL Network reports (via Twitter) that Martin will visit the Lions and Cowboys.

The 2014 third-round pick out of USC spent the first three-seasons of his career with the 49ers, including a 2015 campaign where he started 14 games. However, the lineman only played in four games (two starts) in 2016 before landing on the injured reserve. After being waived by San Francisco last offseason, he was claimed by the Browns. He ultimately didn’t take the field for a single game for Cleveland.

Considering Martin’s ability to play both offensive guard and center, he’d be an easy fit as a reserve for any team.