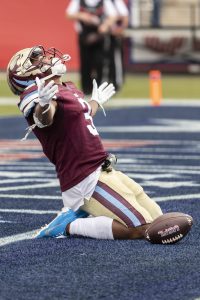 The 49ers have released wide receiver Kevin White, per a club announcement. In a corresponding move, they’ve added linebacker Donald Payne to their offseason roster.

White, a former No. 7 overall pick by the Bears, came out of West Virginia in 2015 with tons of hype. Unfortunately, injuries have limited him to just 17 games since then. Even though the Niners were decimated by injuries last year, White was jockeyed on and off the roster last year. He appeared in three games for SF in 2020 without recording an official statistic. For his career, White has 25 catches for 285 yards and zero touchdowns.

The 49ers will move ahead with Brandon Aiyuk and Deebo Samuel as their leading receivers, plus support from Trent Sherfield, Mohamed Sanu, Jauan Jennings, and others vying for the final WR spots on the depth chart. White was near the bottom of the team’s ~12 WR hopefuls in camp, so his release doesn’t come as a huge surprise.

Payne, meanwhile, has not seen live action since he was with the Jaguars in 2019. That year, he recorded 61 total tackles with one sack, one pass defensed, and one fumble recovery.