After two years spent off the field, journeyman wideout Ryan Switzer is ending his NFL career. The 27-year-old confirmed his retirement today on Twitter.

“Unfortunately, in light of a recent injury, I feel I’m no longer able to meet the physical demands of the game,” his retirement message states. Switzer last saw playing time in 2019, his second year spent with the Steelers. Over the course of that 25-game stretch, he made 44 catches for 280 yards while playing a depth role on offense. Prior to that, in 2017, he played sparingly for the Cowboys.

Switzer is best known, of course, for his work in the return game. He totalled nearly 1,400 yards on kick returns (averaging just under 22 yards per runback), adding his lone special teams touchdown on a punt return.

The UNC alum – who holds the rare distinction of being traded twice in the same offseason, in 2018 – signed a reserve deal with the Browns last January, but didn’t make any appearances with them. There was still interest in him this offseason as well, as he visited the Panthers in April. The fact that he was unable to land a deal speaks to the extent of his injury troubles, which have ended his career prematurely.

“Although my playing days are over,” Switzer adds, “I’m looking forward to using the knowledge and experience I’ve accumulated to help the next generation of players through coaching.” With a second act already in mind, he can now turn his attention to a football career spent on the sidelines.

Much of the talk around the Panthers right now is related to the upcoming draft, but the team is still combing through the free agent market. Carolina hosted defensive linemen Rasheem Green yesterday, per NFL Network’s Ian Rapoport (Twitter link). The day before, they worked out wide receiver Ryan Switzer (Twitter link via ESPN’s Field Yates). 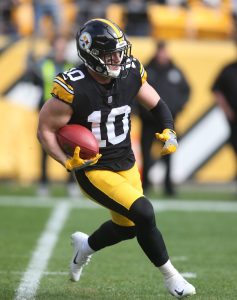 Green, who will be 25 by the start of the season, enjoyed a breakout campaign last year, the final one on his rookie contract with the Seahawks. In 17 games (including 16 starts), he posted 48 tackles and 6.5 sacks. Along with that production, he demonstrated the ability to play at various positions along the defensive line which made him a highly-touted third-round pick.

Green already visited the Ravens in March, so this meeting with the Panthers shows the interest he has generated. Rapoport adds, however, that the USC alum “has remained in contact with Seattle” regarding a new contract there. The Seahawks have added the likes of Shelby Harris, Quinton Jefferson and Uchenna Nwosu to their front seven this offseason, and met with Mario Addison as well.

Switzer, 27, has bounced around throughout his career. Traded twice in the 2018 offseason (from the Cowboys to the Raiders, then to the Steelers), he has only made 50 catches in 41 career games. He is most known for his return ability, with a nearly 22 yard-per-return average and three touchdowns to his name running back kickoffs. He signed a reserve deal with Cleveland last January, but hasn’t seen the field since 2019. In Carolina, he would add depth to a WR room headed by D.J. Moore and Robby Anderson, and which also features the likes of Terrace Marshall and Rashard Higgins.