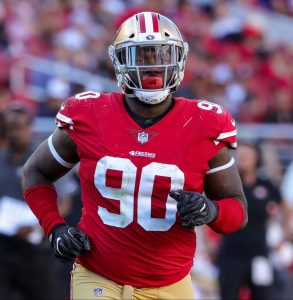 The busiest day of 2019 to date for undrafted free agent agreements, Friday also doubled as the Seahawks’ unveiling date for their post-draft rookie contingent. Here is Seattle’s list:

When combined with the Seahawks’ draft class, Ferguson and Wright represent the fourth and fifth rookie wideouts added to the roster. D.K. Metcalf obviously arrives as the highest-profile target, but Seattle also used a fourth-round pick on Wake Forest’s Gary Jennings. Wright averaged 16.7 yards per catch last season, hauling in five touchdowns with the 2018 Boilermakers. Ferguson put up better stats at the Division I-FCS level, becoming the Southland Conferece’s offensive player of the year after a 1,117-yard, 13-touchdown season.

The Seahawks did not use any of their 11 draft choices on cornerbacks, nor did they sign any this offseason. That may increase the Big 12-produced corners’ chances of making the team. However, seven corners already reside on Seattle’s roster.

While Choice was not Clemson’s lead back last season, he was the national champions’ second-leading rusher with 548 yards. En route to seven rushing touchdowns, Choice averaged 7.1 yards per carry. Christion finished as the Jackrabbits’ all-time leader in all notable passing categories. He ran a 4.47-second 40-yard dash at South Dakota State’s pro day and may have a decent chance to make the Seahawks’ roster. Paxton Lynch represents Seattle’s only backup quarterback option, and Chad Kelly quickly beat him out for the Broncos’ QB2 job last year.