Amerson inked a one-year deal with the Chiefs after being cut by the Raiders, but he essentially played himself out of a roster spot on a club that needed all the help it could get in the secondary. The 26-year-old defensive back made 42 starts with Washington and Oakland from 2014-16, but injuries and ineffectiveness have limited his production since that time.

Detroit currently has five cornerbacks on its roster in Darius Slay, Nevin Lawson, Teez Tabor, Jamal Agnew, and Dee Virgin, while safety Quandre Diggs also moonlights as a slot corner. Amerson could give the Lions more depth in the back end, but he hasn’t historically contributed on special teams, a problem for a reserve player.

Here’s the full list of players Detroit worked out, per Balzer:

One of the stars of this year’s Hard Knocks has found a home. Carl Nassib was claimed by the Buccaneers off waivers, according to Adam Schefter of ESPN (Twitter link). 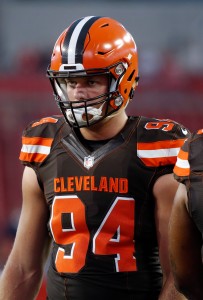 Nassib made the Browns’ initial 53-man roster, but was waived the next day to make room for the Browns’ waiver claims. Nassib was a third round pick in 2016, and never was terrible with the Browns, but the team decided to move on because of their increased depth at the position.

Last year Nassib, appeared in all 16 games for Cleveland, making 12 starts. He had 19 tackles with three sacks and five passes defended. He finished his career in Cleveland with 34 tackles, 5.5 sacks, and nine passes defended total.

He’ll now join a unit in Tampa Bay where he should have the opportunity to make an immediate impact. The Bucs’ pass-rushing group isn’t nearly as deep as Cleveland’s is, so it’s a great landing spot for Nassib. The former Penn State Nittany Lion, who set a school record with 15.5 sacks his senior season, should get a chance to re-invent himself.

According to Ian Rapoport of NFL Network (Twitter link), the Bucs are releasing veteran defensive end Will Clarke to make room for Nassib on the roster.