For the first time in over a decade, the Panthers have a young player positioned to be a long-term left tackle. The franchise will enter this season with a 10th primary left tackle option in the past 10 years, but Ikem Ekwonu appears poised to halt that streak. 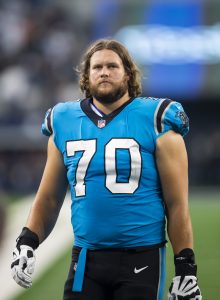 Ekwonu’s arrival, however, is likely to move one of Carolina’s Day 2 picks from last year to a new role. The Panthers view Brady Christensen, a 2021 third-round choice, as a better guard option than he was at tackle, Joseph Person of The Athletic notes (subscription required). The BYU product has worked at guard and center during the Panthers’ offseason program thus far.

Christensen started six games at left tackle last season, allowing four sacks on 480 snaps. Carolina lost each of those six games, though the team had many other issues, and Matt Rhule said last year he viewed the rookie as an interior blocker. But the embattled head coach said earlier this offseason he saw some promise for Christensen at tackle, where he started the final three games of last season. Prior to the draft, offensive line coach James Campen also said Christensen would factor into the left tackle picture. Ekwonu going to his home-state team at No. 6 overall changed that plan.

Although Christensen was an All-American left tackle who generated Pro Football Focus’ highest single-season tackle grade in the site’s short history grading college players, it appears a best-five-blockers-type plan could produce a quintet featuring the 6-foot-6 lineman alongside Ekwonu next season.

The Panthers did not let Michael Jordan get past them on the waiver wire. They submitted a claim and landed the former Bengals guard Wednesday.

Jordan started 19 games with the Bengals over the past two years, doing so after Cincinnati selected him in the 2019 fourth round. The Panthers will give the interior blocker another shot. Two years remain on MJ’s contract.

Pro Football Focus has not been especially impressed with Jordan through two seasons, though he did not fare as poorly in 2020 as the advanced metrics site viewed him as a rookie. Jordan graded just inside the top 60 among the 80-plus full-time guards PFF assessed last season. 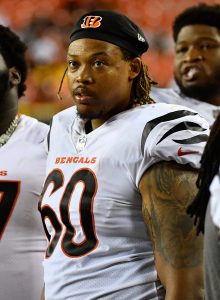 This year, the Bengals invested a bit more in their O-Line, adding Riley Reiff at tackle while drafting Clemson’s Jackson Carman in Round 2.

The Bengals still have lots of cuts to make between now and 4pm ET/3pm CT. By that time, they’ll need to be at the league’s new 53-man roster maximum.