One of the members of Cincinnati’s extremely successful 10-man 2021 rookie class has unfortunately decided to walk away from football. In a tweet this afternoon, Bengals defensive end Wyatt Hubert cited his physical health as the root cause of his retirement. 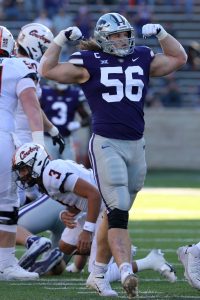 “Unfortunately I have dealt with many injuries that have taken a permanent toll on my game, body, and performance on the field,” Hubert elaborated. “This decision has been difficult and humbling as I have been blessed to have made it to the NFL and be drafted by a great organization in the Cincinnati Bengals.”

Hubert never made it to the field at the NFL-level. In college, Hubert was a key contributor at Kansas State, starting about 2.5 of the 4 seasons he spent in Manhattan. After redshirting his first year, Hubert started seven of twelve games as a redshirt freshman ranking third in the nation among freshman in sacks per game. He started every remaining college game of his career after that, earning first team All Big 12 honors after leading the Wildcats in tackles for loss (12.5) and sacks (7.0) as a redshirt sophomore.

Despite playing in two fewer games as a redshirt junior, Hubert increased his career highs with 13.0 tackles for loss and 8.5 sacks, good enough to earn him a second-consecutive year on the All Big 12 first team. As the only unanimous first team All Big 12 selection on defense, Hubert also earned votes as the Big 12 Defensive Player of the Year and the Big 12 Defensive Lineman of the Year.

His two-year run of success led him to forgo his final year of college eligibility and declare for the 2021 NFL Draft. Hubert was selected by Cincinnati in the seventh-round, but suffered a torn pectoral muscle before the season began, landing him on the reserve/non-football injury list.

A year later, it seems injuries like that have taken their toll on the 24-year-old, influencing him to change his career path before it harms him beyond repair. While the Bengals never got the privilege of seeing his contributions on the field, those who watched him rock the royal purple in college, know what a loss Cincinnati’s defense has suffered.

The Bengals will be without one of their rookies for the entirety of the 2021 season. Defensive end Wyatt Hubert is set to miss the year after tearing a pectoral muscle, ESPN.com’s Ben Baby tweets.

Cincinnati selected Hubert in the seventh round out of Kansas State. Hubert is one of three D-linemen the Bengals chose on Day 3, following fourth-round defensive end Cameron Sample and fourth-round D-tackle Tyler Shelvin. Third-round pick Joseph Ossai also compiled 10.5 sacks from his linebacker position over the past two seasons.

Hubert is coming off a strong junior year. Despite the COVID-19 pandemic reducing the college football season, Hubert registered a career-high 8.5 sacks — third-most in the Big 12 — and 13 tackles for loss. He posted seven sacks and 12.5 tackles for loss as a sophomore in 2019.

Cincy has reshuffled its defensive line over the past several months, trading Carlos Dunlap and cutting Geno Atkins. The team also did not use its franchise tag on Carl Lawson, who joined the Jets. The Bengals extended Sam Hubbard on Sunday, however, and signed breakout Saints pass rusher Trey Hendrickson to start alongside him. Hubert will aim to join this mix in 2022.

The Bengals were busy on Monday, inking all seven of their Day 3 picks to their rookie deals. We’ll keep track of all of today’s draft pick signings below: