The Ravens claimed offensive tackle Brandon Knight earlier this week, but the team subsequently placed him on the reserve/did not report list. Well, the 24-year-old revealed tonight that he’s temporarily stepping away from the game. 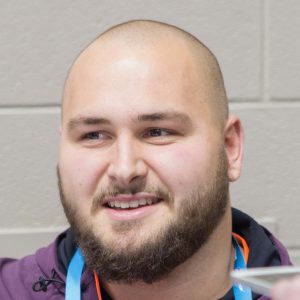 “First and foremost, I want to thank the Baltimore Ravens for allowing me another opportunity to play the game I’ve always loved,” Knight said in a statement (via Twitter). “As of now, I’ve decided to take a break from football to address my mental health. Although it was a difficult decision, it was a necessary one to be back home with my family. I look forward to returning next season.”

The former Indiana lineman joined the Cowboys as an undrafted free agent in 2019. He ended up appearing in seven games as a rookie, getting one start. He saw even more responsibility in 2020, starting nine of his 13 games.

However, Knight only saw time in one game this season, garnering four snaps. He was waived by the organization last week.

The Ravens had to reverse course on their waiver claim, and they ended up pivoting to veteran offensive lineman James Carpenter. The team has been hunting for offensive line help since All-Pro left tackle Ronnie Stanley opted to go under the knife this week, ruling him out for the rest of the year.

The Ravens have designated tight end Nick Boyle to return from the injured reserve list, per a club announcement. Meanwhile, they’ve reversed course on their waiver claim of Brandon Knight, as the former Cowboys offensive lineman did not report to the team. Instead, the Ravens pivoted to veteran offensive lineman James Carpenter.

Boyle opened the year on IR as he was still healing up from his November knee injury. A recent microscopic surgery helped somewhat, but also elongated his rehab. The good news is that Boyle is back to provide blocking for a Ravens squad that will be without Ronnie Stanley. The All-Pro left tackle opted to go under the knife this week, ruling him out for the rest of the year.

Boyle’s best season as a receiver came in 2019, when he had 31 catches for 321 yards and two touchdowns. The Ravens still have him under contract through 2023 thanks to the two-year, $13MM extension he inked back in January.

After getting blown out by the Cardinals last night and falling to 2-4, it sounds like some of the players are starting to point fingers at the coaching staff. Jane Slater of NFL Network tweets that “discontent is leaking out” of the Cowboys locker room, with one player stating that the coaches “just aren’t good at their jobs”

“Totally unprepared,” another player said of the coaching staff. “They don’t teach. They don’t have any sense of adjusting on the fly.”

Meanwhile, head coach Mike McCarthy indicated to reporters that instead of leaking these qualms to the media, he’d rather keep those types of conversations in house.

“I just really go back to my first meeting with the football team. I’ve always stated that…it’s important to handle things as men,” McCarthy said (via Charean Williams of ProFootballTalk.com). “I mean, if you do have something to say publicly that is of most important, I think it’s important to say it to the individual, or particularly in a group dynamic setting, especially in the game of football, especially for the Dallas Cowboys. I mean, that’s all part of the development our program, of the system that we’ve got going here. I think that’s just part of our flight right now. We don’t like the way we played last night. We had some areas that we struggled strong in. It’s definitely not what we’re looking for.”

Some more notes out of Dallas:

Oct 9: Smith will undergo neck surgery and will miss the rest of the season, head coach Mike McCarthy announced this morning (Twitter link via Clarence Hill Jr. of the Fort Worth Star-Telegram). However, he is expected to make a full recovery and plans to be back in action for Week 1 of the 2021 season (Twitter link via Gehlken).

Oct. 8: Tyron Smith played all 82 of the Cowboys’ offensive snaps in their shootout loss to the Browns, but the neck injury that caused the All-Pro left tackle to miss the previous two games continues to be a concern.

The Cowboys are considering placing Smith on IR and are not certain he can continue to play this season, Ed Werder of ESPN.com reports (on Twitter). Smith indeed suffered a setback with his neck and is gathering medical information. He also is considering the prospect of the injury shutting him down for the rest of the season, Jane Slater and Mike Garafolo of NFL.com report (on Twitter).

This would certainly be a major loss for a Cowboys team that has already seen right tackle La’el Collins shelved for the season. Travis Frederick‘s offseason retirement would leave Zack Martin alone among Dallas’ All-Pro blocking coalition responsible for helping the respective rises of Dak Prescott and Ezekiel Elliott.

The Cowboys are also down center Joe Looney, who left Sunday’s game after the first play. The team confirmed its starting center is dealing with an MCL issue and will miss time. As for Smith, he has gone to seven straight Pro Bowls and joined Martin on the 2010s’ All-Decade team. The 2011 first-round pick has never missed more than three games in a season.

UDFAs Brandon Knight and Terence Steele are expected to be the Cowboys’ left and right tackles, respectively, for the foreseeable future, the Dallas Morning News’ Michael Gehlken tweets. A Smith IR stay would mean at least three missed games, pushing his total to a minimum of five absences this season. Even if that ends up being the Cowboys’ move, their offensive line has run into the kind of trouble that it has not faced in many years.