The Jets are making another kicking change. The team has released kicker Sergio Castillo after a tough outing against the Seahawks, they announced on Tuesday. 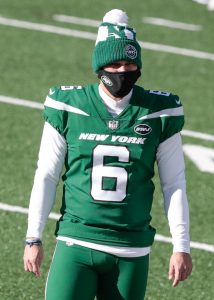 New York entered the year with Sam Ficken as their kicker, but injuries have limited him to only seven games. Castillo was first inserted after Ficken went down following Week 6, and again when Ficken re-injured himself in Week 11. In six games he’ll finish his run with the Jets having made only eight of 15 field goal attempts with a long of 55. He made six of his seven extra point attempts. On Sunday he was a disaster, missing three field goals in the Jets’ loss to Seattle.

An undrafted free agent out of West Texas A&M back in 2014, Castillo finally got his first taste of regular season NFL action this season. He spent a few years in the CFL, and also played in the AAF and XFL. If nothing else, not too many people can say they’ve played in all four leagues. Ficken is eligible to come off injured reserve this week, and the Jets also claimed Chase McLaughlin off waivers yesterday, putting the nail in Castillo’s coffin.

You can find Saturday’s minor transactions from around the NFL below, with the latest moves added to the top of the page throughout the afternoon and evening….

Yesterday, in the wake of Sean Weatherspoon‘s season-ending Achilles injury, I examined the Falcons’ options for potential linebacker replacements. While Atlanta isn’t likely to find a player capable of replicating Weatherspoon’s production, there are several in-house candidates to play more snaps. Still, I concluded that the Falcons would probably increase their pursuit of an outside option, perhaps bringing in a veteran via free agency. It didn’t take long for reports to confirm that the club was exploring that possibility, with a story last night suggesting Pat Angerer, Jonathan Vilma, and Tim Dobbins were among the Falcons’ potential targets.

Here’s the latest from out of Atlanta:

The Texans have locked up a couple more draft picks, according to John McClain of the Houston Chronicle, who tweets that third-round defensive tackle Louis Nix and sixth-round defensive end Jeoffrey Pagan have agreed to terms with the club.

Nix’s case is an example of how much it can cost a player early in his career financially if he slips in the draft — heading into the second day, there were rumblings that Houston might grab the Notre Dame product with the first pick in the second round. Instead, the Texans nabbed him midway through the third round. The difference? Nix gets a signing bonus of about $575K rather than $2.358MM, per Jason Fitzgerald of Over The Cap.