Rex Ryan was a beloved players’ coach with the Jets from 2009-14, but it doesn’t seem that was fully the case during his nearly two-year run in Buffalo. Reacting to the Bills’ Tuesday decision to fire Ryan, one defensive player informed Bleacher Report’s Tyler Dunne, “That was music to my ears.” Similarly, some other Bills never bought into Ryan and felt he tore down the elite defense he inherited in 2015, according to Dunne (Twitter links). On the other side of the ball, wide receiver Sammy Watkins told the team’s official website that a “culture change” will be in order with Ryan’s successor. “Change the culture, change the mindset and get players on board,” he said. “If they’re not listening, cut them, kick them out, whatever. Sit them on the bench. I think that will help us move forward.”

The Chiefs have signed linebacker Sio Moore, as Adam Schefter of ESPN.com tweets. Moore was cut by the Colts earlier this week. 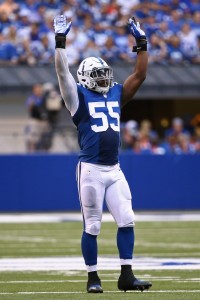 Moore suffered a significant hamstring injury this summer which held him back in practice. He healed up from that injury, but he was unable to impress in the first month of this season with Indianapolis. He was cut on Tuesday after amassing 25 total tackles and five assisted tackles.

In two seasons with the Raiders and one season and change with the Colts, Moore has appeared in 42 games with 26 starts. He had 4.5 sacks as a rookie and 3.0 sacks in his sophomore year, but he has been unable to replicate those numbers in the past couple of years.

The Colts are working on a new contract for future Hall-of-Fame kicker Adam Vinatieri, sources tell Ian Rapoport of NFL.com, who tweets that this was an “open secret” at the combine in Indianapolis. A report last month indicated that the team wanted to bring back Vinatieri, who expressed a desire to continue playing — perhaps for multiple years.

“Not only a season, but Lord willing, a couple of years,” Vinatieri said at the time. “There will come a time when it’s over for me. I don’t think that time is yet. I enjoy playing. I enjoy doing my thing.”

As we wait to see if the Colts and Vinatieri can hammer something out within the next few days, let’s round up several more notes and rumors on free-agents-to-be….

The Chiefs’ offensive line depth took a hit today, as the team announced (via Twitter) it has placed veteran guard Paul Fanaika on the injured reserve list. To replace Fanaika on the roster, the club re-signed linebacker Dezman Moses.

Fanaika, 29, emerged as a starter in Arizona in 2013, and ultimately started 30 games at right guard for the Cardinals over the last two seasons. After signing with the Chiefs back in March, Fanaika earned a spot on the 53-man roster as a reserve offensive lineman, and likely would’ve been relied upon at guard or tackle if he was needed.

Instead, he’ll spend the year on injured reserve, or at least will remain on IR until he and Kansas City reach an injury settlement. The nature and severity of Fanaika’s injury isn’t yet known.

As for Moses, he returns to the Chiefs after spending the 2014 season on injured reserve. He was a special teams contributor for the club in 2013, playing just 59 defensive snaps that year.

With this year’s NCAA basketball tournament underway, the Colts‘ latest signing is a topical one. According to a team release, Indianapolis has signed Demarco Cox, a 6’8″, 294-pound basketball center who played his college ball at Ole Miss and Georgia Tech. Cox played football in high school before choosing basketball in college, and will be joining the Colts as an offensive tackle. While he may not be a good bet to make the team’s regular season roster, Cox should get a look from the Colts’ coaching staff this summer.

Here are the rest of Thursday’s minor transactions from around the NFL, with the latest moves added to the top of the list throughout the day: