The Bills are not waiting for the season to end to make a head coaching change. Rex Ryan has been let go and offensive coordinator Anthony Lynn will take over as the interim head coach. Rob Ryan (assistant head coach/defense) has also been relieved of his duties. 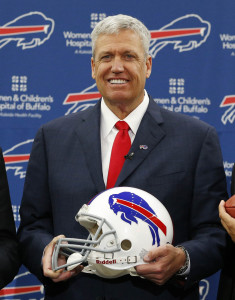 “I spoke with Rex earlier today and we mutually agreed that the time to part ways is now. These decisions are never easy. I want to take this opportunity to thank Rex for all his efforts and wish him all the best moving forward,” owner Terry Pegula said in a statement. “Kim and I and our entire Bills organization share in the same disappointment and frustration as our fans, but we remain committed to our goal of bringing a championship to Western New York.”

Rex Ryan was not given a third year to turn things around in Buffalo despite finishing with a .500 record in his first year and guiding the team to a 7-8 mark so far this season. The Bills will not qualify for the playoffs for the 17th straight season and the organization is not willing to take the patient approach any longer.

Lynn has gone from running backs coach to offensive coordinator to head coach in just three months. His first promotion came when Greg Roman was forced out earlier this year and he’ll now get to audition for the team’s permanent role. Reportedly, the Bills wanted to push Ryan out in part because of their desire to retain Lynn. Lynn has long been identified as a strong head coaching candidate for this offseason.

There are conflicting reports regarding GM Doug Whaley’s job security. A little over a week ago, Adam Schefter of ESPN.com reported that Whaley is not in jeopardy of getting fired. However, over the weekend, Ben Volin of The Boston Globe said that his status “remains up in the air.”

As of this writing, there are now three teams that will be looking for head coaches in the New Year: the Rams, Jaguars, and Bills.