The Dolphins have signed running back Storm Johnson to their practice squad, according to Armando Salguero of the Miami Herald (Twitter link). 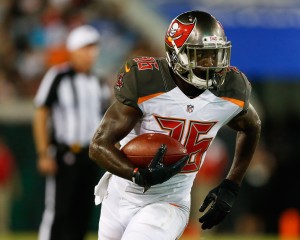 Johnson, previously with the Jaguars and Buccaneers, now has the distinction of having been a part of all three of the NFL’s Florida organizations. He also attended college at Central Florida, and his tenure there was good enough for the Jags to use a seventh-round pick on him in 2014. Johnson collected 29 carries for 86 yards and two touchdowns as a rookie, but he sat out last season after the Jaguars cut him in advance of Week 1. Johnson then inked a two-year deal in April with the Bucs, who waived the 24-year-old in August.

Barring injuries, Johnson will have a difficult time cracking the Dolphins’ roster this year. Jay Ajayi has been among the league’s best running backs, while Damien Wiliams and Week 9 hero Kenyan Drake have fared well in reserve.