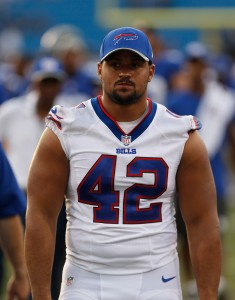 2:03pm: The Bills have formally announced the signing.

10:13am: Defensive end/outside linebacker Kroy Biermann is on his way to Buffalo to sign a one-year deal with the Bills, source tells ESPN NFL Insider Adam Schefter (on Twitter). 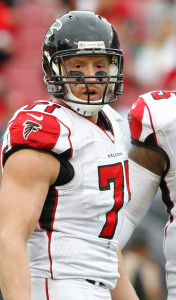 This offseason, the Lions looked at Biermann as a defensive end but ultimately decided against signing him. Biermann also visited the Bills in March and even though he did not sign a deal during that visit, he circled back to them today.

In 2014, the 30-year-old started a career-high 15 games for the Falcons, racking up 77 tackles and 4.5 sacks to go along with a forced fumble. The numbers showed that he was an above-average run defender and held his own as a pass rusher. Now, he’ll try to get back to that form in Buffalo.

The Lions are hosting veteran Kroy Biermann on a visit today, according to Ian Rapoport of NFL.com (via Twitter). To date, the edge defender has spent all eight of his NFL seasons with the Falcons.

Biermann offers experience at both defensive end and linebacker, but Adam Caplan of ESPN.com (on Twitter) hears that Detroit is looking at him as a defensive end. If Detroit signs Biermann, he’ll join a group of bookends that includes Ziggy Ansah, Devin Taylor, and former Cincinnati defensive end Wallace Gilberry.

In 2014, the 30-year-old started a career-high 15 games for the Falcons, racking up 77 tackles and 4.5 sacks to go along with a forced fumble. The numbers showed that he was an above-average run defender and held his own as a pass rusher. He’ll try to get back to that level of play in 2016, potentially in Detroit.

WEDNESDAY, 3:27pm: Having already brought in a pair of new defensive ends by signing Adrian Clayborn and O’Brien Schofield, the Falcons locked up one of their own today. According to a team release, Atlanta has re-signed veteran edge defender Kroy Biermann.

Biermann, 29, started a career-high 15 games for the Falcons last season, racking up 77 tackles and 4.5 sacks to go along with a forced fumble. In 867 defensive snaps, he recorded a -5.7 grade on Pro Football Focus (subscription required), but that was largely due to a poor rating in pass coverage — he was an above-average run defender and held his own as a pass rusher.

ESPN’s John Clayton has been covering the NFL since his high school days in 1972, and you’d be hard pressed to find a more knowledgable man or woman on pro football. His Sunday mailbags are a treat, full of wit and wisdom, and we’re passing along some of Clayton’s best responses to readers’ questions to you.

Clayton also touches on the Giants and Bills, the two teams meeting in the Pro Football Hall of Fame Game and thus the first two teams to open training camp.

On the Falcons’ defensive line:

“The Falcons‘ pass rush has to be better. Their nickel defense gave up 6.48 yards per play and 7.75 yards per attempt and had only 23 sacks this past year. The return of a healthy Kroy Biermann will help. Former Dolphin Paul Soliai is a big, physical addition to the defensive line, but it’s unclear how the Falcons will use him. He’s a run-stopper who could draw an extra blocker, but he has only 4½ sacks in his seven NFL seasons. I’ll be intrigued to see if Ra’Shede Hageman can get into a pass-rushing role in the nickel. He might be a pretty special athlete.”

On the ramifications of Josh Gordon‘s impending suspension:

“If Gordon is suspended for the year, his contract would be tolled, meaning his deal would be put on pause and he would still have two years remaining when his suspension is lifted. His salary would not count against this year’s cap. Plus, the team would have the ability to try to get him to pay back the prorated amount for one year of his signing bonus, a total of $518,209. Gordon would count only the $518,209 on this year’s cap if he is suspended. If the Browns get the signing bonus back, they would get a rebate on the amount in next year’s cap. The bigger problem, though, is that the Browns would lose one of the best young receivers in the game.”

On the possibility of a team that plays on Thanksgiving this year — Bears, Lions, Eagles, Cowboys, Seahawks and 49ers — winning the Super Bowl, which hasn’t happened in 18 years:

“I did not realize that. Part of it is because Dallas and Detroit are the two traditional Thanksgiving hosts. The Cowboys have been an 8-8 team for the past three years and most recently won the Super Bowl in the 1995 season. The Lions have made only one trip to the playoffs since 1999 and never have reached the Super Bowl. The addition of a third game in 2006 hasn’t ended the trend, but it might this year. San Francisco and Seattle are two of the best teams in football. The Bears are contenders, and the Eagles might have the best team in the NFC East. Interesting thought.”

Umenyiora, Biermann To Stay With Falcons

Falcons defensive ends Osi Umenyiora and Kroy Biermann will be back with the team in 2014 without having to restructure their contracts, reports Orlando Ledbetter of the Atlanta Journal Constitution.

There had been speculation that Umenyiora, scheduled to count $4.75MM against the cap in 2014, would have to take a pay cut or be released, but Ledbetter says the team was pleased with the 32-year-old veteran’s mentoring of young players. Umenyiora became more of a situational pass rusher down the stretch, finishing the season with 47 tackles, 7.5 sacks, three batted passes and three forced fumbles.

Biermann, 28, is coming off Achilles tendon surgery which ended his season in Week Two. Primarily a situational player with the exception of 2010 when he started 14 games, Biermann has notched 16.5 sacks in 82 career games. He will count $5.1MM against the cap.