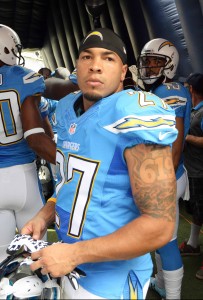 The Chargers announced that they have cut safety Jimmy Wilson. The veteran signed a two-year, $4.25MM deal with San Diego in the offseason.

Wilson joined the Bolts in March after four years with the Dolphins. The fifth-year pro recorded 44 tackles, one sack, and two passes defensed this season, but clearly didn’t meet the club’s expectations for him across his 13 games with six starts.

The Chargers now have two open spots on the active roster following the release of Wilson.

6:59pm: The Chargers have signed free agent defensive back Jimmy Wilson to a two-year contract, the team announced (via Twitter). Financial terms of the deal have not yet been reported.

Wilson, 28, spent the first four years of his career in Miami. As recently as Wednesday, the Dolphins were in talks with Wilson’s agent, Drew Rosenhaus, in hopes of retaining him, Armando Salguero of the Miami Herald tweeted.

Wilson appeared in 60 games as a Dolphin and intercepted four passes. He totaled just eight starts during his first three seasons before amassing a career-high 13 in 2014. Eight of those starts came at cornerback, while the other five were from the safety position. Pro Football Focus (subscription required) wasn’t impressed with Wilson’s work as a corner last year, ranking him 94th out of 108 qualifiers. However, the site rated him a far better 34th out of 87 safeties.

Wilson will add depth and versatility to a Chargers defense that finished fourth against the pass in 2014. However, San Diego has already lost safety Marcus Gilchrist to free agency this year and could also see cornerback Shareece Wright depart.

Many speculated that James Harrison could follow former coach Dick LeBeau to the Titans, and on Wednesday we received confirmation of that. “We are certainly interested,” agent Bill Parise said of his client’s interest in the Titans, according to Jim Wyatt of The Tennessean. “James feels very, very strongly about coach LeBeau. And I know Dick feels the same way. It’s a natural thing. I’m sure the Steelers are still in play, too. It will probably be one of those. I hope it’s one of those. We are not ruling anybody out, but the two logical fits are Tennessee and Pittsburgh. Those are the team teams that make the most sense.” More from around the league..