For a long time toward the end of the college season, Ohio State pass-rusher Nick Bosa was the favorite to go first overall in the 2019 draft. But ever since Kliff Kingsbury got the head coaching job with the Cardinals, momentum has steadily shifted toward Kyler Murray. The current conventional wisdom is that Arizona is leaning toward taking Murray with the first pick, and shopping Josh Rosen. But they won’t admit it publicly, and there are reasons to believe they haven’t actually made up their minds yet.

The Cardinals are having dinner with Bosa tonight, a source told Adam Schefter of ESPN.com (Twitter link). Bosa, the younger brother of Chargers defensive end Joey Bosa, dominated in the Big Ten. The Cardinals have been not so subtle with their interest in Murray, but it’s still possible that it’s all been a smokescreen to try and distract from their true intentions with the pick. If the Cardinals pass on him, Bosa is still a lock to go within the first couple of picks. We heard earlier this week that the 49ers were targeting him at second overall.

Deiontrez Mount‘s season has ended before it could even begin. The linebacker suffered a torn Achilles while rushing the quarterback during OTA practices and will have season-ending surgery this week, according to Mike Klis of 9News. 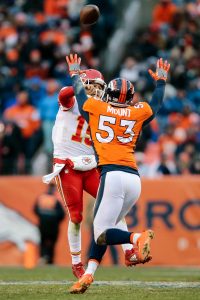 Mount played in the Broncos’ final seven games last season as a core special teams player and recorded six tackles in total. Before joining the Broncos’ practice squad last year (and eventually earning a promotion), Mount spent time with the Titans and Colts.

After a disappointing 2017, the Broncos retooled their team in hopes of getting back on track. This week, PFR readers were asked to vote on which team had the best offseason in the AFC West and the Broncos are not far from the lead.