The Raiders have swapped one lineman for another. Michael Gehlken of the Las Vegas Review-Journal reports (via Twitter) that the team has signed offensive guard Cameron Hunt. In a corresponding move, the Raiders waived 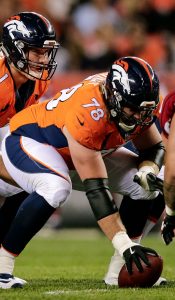 Hunt, a 2017 undrafted free agent out of Oregon, spent last preseason with the Broncos. He ultimately landed on the 49ers practice squad in November, where he spent the rest of the season. The 23-year-old provides versatility on the right side of the offensive line, as he played both tackle and guard during his collegiate career. The Raiders are currently carrying 16 lineman, so it will still be a struggle for Hunt to make the team’s opening-day roster.

Officer joined the Raiders as an undrafted free agent immediately after the draft. The Pittsburgh product is the second rookie to be waived by Oakland prior to OTAs, joining fullback Nick Sharga.