Justin Ellis played in just one game this season before being placed on IR. He will return, however, for the final games of Jon Gruden‘s first year back.

The Raiders activated Ellis from IR on Saturday, and the fifth-year defensive tackle will be in line to play Sunday against the Chiefs. Oakland waived offensive lineman Denver Kirkland to clear a roster spot.

Re-signed this offseason, Ellis is one of the few Reggie McKenzie draft picks still around in Oakland. The 2014 fourth-round selection has started for most of his career, producing his best season in 2017 — 48 tackles, a half-sack. He’s signed through the 2020 season.

Kirkland played in six games for the Raiders in 2016 and ’18. He served as an extra offensive lineman in power sets during Oakland’s 12-4 2016 campaign but has only made one regular-season appearance since.

Obi Melifonwu‘s tenure with the Raiders has come to an end. ESPN’s Field Yates reports (via Twitter) that the organization has waived the defensive back off of the injured reserve. The team has also promoted wideout Marcell Ateman and offensive lineman Denver Kirkland from the practice squad (via Michael Gehlken of the Las Vegas Review-Journal on Twitter). 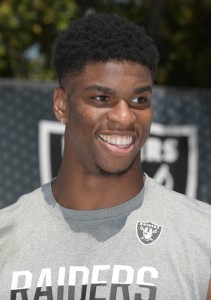 Melifonwu was selected in the second round of the 2017 draft following a standout career at Connecticut. The 24-year-old safety played sparingly during his rookie campaign, compiling seven tackles in five games (one start). Melifonwu was placed on the IR twice during his first season, and he was waived/injured by the Raiders back in August. After clearing waivers, he landed on the team’s injured reserve.

Ateman was a seventh-round pick by the organization in this past year’s draft. The Oklahoma State product was waived at the end of the preseason, and he subsequently caught on with the team’s practice squad. Kirkland has been with the organization for several seasons after going undrafted out of Arkansas during the 2016 draft. The 24-year-old started four of his six games back in 2016.

Earlier today, the Raiders made a switch at kicker. The team signed Daniel Carlson and waived Matt McCrane.