Buccaneers guard Aaron Stinnie tore the ACL and MCL in his left knee during Saturday’s preseason loss to the Titans and will miss the entire 2022 season, as head coach Todd Bowles confirmed to reporters. Jenna Laine of ESPN.com reported the news (via Twitter) shortly before Bowles’ announcement. 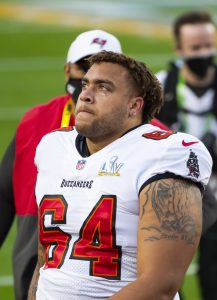 This was the feared outcome after Stinnie was carted off the field, and it will further test an O-line that does not seem capable of withstanding many more losses. Seven-year starter Ali Marpet surprisingly announced his retirement in February, three-year starter Alex Cappa signed with the Bengals in March, and center Ryan Jensen may be lost for the season after sustaining a serious knee injury of his own. At the very least, it appears that Jensen will miss significant time.

Stinnie, who re-signed with Tampa this offseason on a one-year deal worth up to $2.5MM, was competing with Nick Leverett and second-round rookie Luke Goedeke for the starting left guard gig. Leverett was also battling Robert Hainsey for the starting pivot role in Jensen’s absence, though recent reports have suggested that Hainsey may have that job sewn up.

Stinnie, 28, signed with the Titans as a UDFA in 2018. Tampa claimed him off waivers from Tennessee in 2019, and he became a valuable contributor for the Bucs during their 2020 Super Bowl run. He started the final three playoff games that season — including Super Bowl LV — in the wake of Cappa’s ankle injury.

Bowles did have some good news for Bucs fans today, announcing that right tackle Tristan Wirfs, who sustained an oblique injury, is not at risk of missing Week 1 and is considered day-to-day (Twitter link via Scott Smith of the team’s official website). Bowles added that, while he is comfortable with his existing OL depth, he expects the club to monitor the FA market for reinforcements.

One comment on “Bucs G Aaron Stinnie Out For Season”