Now a free agent, Kyle Fuller figures to have some options. One will be in Denver with his former defensive coordinator.

The Broncos are expected to make a “strong push” to sign the veteran cornerback, Mike Garafolo of NFL.com tweets. Vic Fangio coached Fuller for four seasons as Chicago’s D-coordinator. New Denver GM George Paton was with the Vikings throughout Fuller’s Bears career.

It should not be ruled out, as the Raiders have shown this week, that the Bears could find a trade partner at the 11th hour. But the team likely discussed Fuller with other teams before cutting him. Fuller was due to make $13MM as part of his 2018 contract, which the Packers constructed after the Bears transition-tagged him.

While the Broncos made a key addition in Ronald Darby, they still have a need at cornerback. They also roster ex-Fuller teammate Bryce Callahan, who is going into his third season with the team. Callahan has shown the ability to play outside and in the slot, his strength, but he has battled significant injury issues that would prevent the Broncos from counting on him. Callahan missed all of the 2019 season and was limited to 10 games last season.

Denver entered free agency targeting more than one cornerback, and Mike Klis of 9News notes the team made an offer to Michael Davis early this week (Twitter link). The Chargers, however, re-signed Davis. Fuller, 28, certainly carries a higher profile. The Broncos not adding another will make corner a logical target at No. 9 overall.

The Bears drafted Fuller before Fangio’s 2015 arrival, taking him in the 2014 first round, but he still broke out during Fangio’s run. The Bears passed on Fuller’s fifth-year option in 2017, but he delivered a first-team All-Pro 2018 season in Fangio’s Chicago finale. Considering the Packers signed Fuller to the offer sheet three years ago, they may be back in the mix for him as well. Other teams figure to inquire too, but Fangio’s presence may be pivotal for the Broncos.

Having just released Casey Hayward, the Chargers agreed to terms with one of their younger cornerbacks. They will keep Michael Davis off the free agent market via three-year deal, according to NFL.com’s Mike Garafolo (on Twitter).

A key Los Angeles contributor, Davis will stay in southern California and receive $15MM guaranteed to do so, per Garafolo (on Twitter). He received interest from a few other teams as well but will play his fifth season in L.A.

A year ago, the Bolts gave Davis a second-round tender. He intercepted a career-high three passes last year, following a 2019 season in which he nabbed two picks. The former UDFA graded as Pro Football Focus’ No. 55 overall cornerback in 2020.

The Chargers have parted ways with two All-Pro corners over the past several months, having traded Desmond King — who also dabbled at safety in L.A. — to the Titans ahead of their Hayward cut. Going into the new league year, Davis and Chris Harris are the Bolts’ top corners.

Chargers cornerback Michael Davis signed his second-round tender, as Field Yates of ESPN.com tweets. With that, Davis will earn roughly $3.3MM in 2020 on a one-year deal. 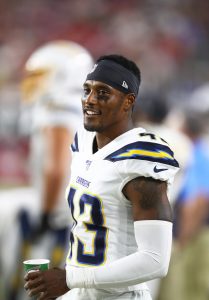 [RELATED: Rams-Chargers Stadium May Not Be Ready For Season]

Davis was set for restricted free agency and the Bolts tendered him at the second-round level to keep other teams at bay. Last year, Davis started in all 12 of his games as the Chargers worked around a rash of injuries in the secondary. Derwin James, Adrian Phillips, and second-round rookie Nasir Adderley all succumbed to different maladies, thrusting Davis into the spotlight.

Davis, meanwhile, missed a pair of games due to a substance-abuse policy violation. All together, the advanced metrics were not wild about Davis’ performance – he graded out as one of the NFL’s worst qualified corners, according to Pro Football Focus. Still, he managed 39 stops and the first two interceptions of his career. It was, at minimum, enough for the Chargers to hang on to him for another season.

This year, the Chargers’ secondary will be bolstered by the arrival of Chris Harris, who is expected to play in the slot. The longtime Broncos star gives the Chargers three first-team All-Pros in the unit – Harris, James, and Desmond King – plus second-team All-Pro Casey Hayward. King, who excelled in the slot last year, will likely shift to safety.

The Chargers’ secondary has been shorthanded throughout 2019, and the NFL dealt the unit another blow Friday. Cornerback Michael Davis received a two-game suspension for violating the league’s substance-abuse policy, the league announced.

Davis has started nine games this season and has played 493 snaps. The Bolts remain without Derwin James, recently recalled Adrian Phillips from IR and lost second-round rookie Nasir Adderley for the season.

Joining Casey Hayward as a starting cornerback, Davis has done well for a former UDFA. The third-year defender started nine games last season and played in 16. This year, he’s made 27 tackles and notched his first NFL interception. Although Pro Football Focus has graded the BYU product as one of this season’s worst defensive backs, Davis has helped a Bolts secondary that’s experienced rampant injury trouble.

Second-year UDFA Brandon Facyson joins Hayward and Desmond King as the Bolts’ only other cornerback, so a roster transaction before the team’s Week 13 game should be expected.