The Eagles have claimed defensive tackle Taylor Hart off waivers from the 49ers and signed cornerback Aaron Grymes to their practice squad, Adam Caplan of ESPN was among those to report (Twitter link). The club has also placed cornerback Ron Brooks on injured reserve and released offensive lineman Matt Rotheram. 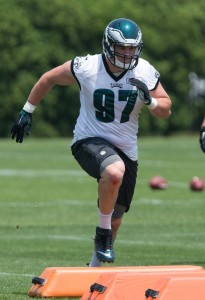 Hart will now return to Philadelphia, which selected him in the fifth round of the 2015 draft. After a rookie year in which he totaled 14 appearances, including one start, and 12 tackles, Hart was unable to survive the Eagles’ final cuts in September. The 49ers, led by former Eagles head coach Chip Kelly, then claimed Hart, but he only made one appearance with San Francisco before it cut him. Hart also played under Kelly at Oregon.

Brooks ruptured his quadriceps tendon in the Eagles’ 21-10 win over the Vikings on Sunday, so his placement on IR comes as no surprise. Grymes, who was previously with the Eagles over the summer, worked out for the club Monday before signing and will provide extra organizational depth in Brooks’ absence.

Friday’s practice squad moves from around the NFL: