The Eagles have released former first-round defensive end Marcus Smith, according to a team announcement. Meanwhile, linebacker Steven Daniels has been inked to a three-year deal. 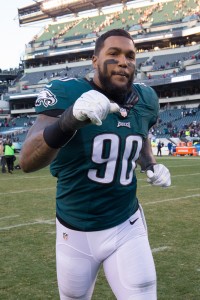 The Eagles declined Smith‘s fifth-year option for 2018 earlier this offseason, fueling speculation that he might not make the roster this year. By cutting Smith now, the Eagles have ostensibly given him a better chance to hook on elsewhere. The team also avoided paying out a $594K roster bonus on the third day of camp. By waiving Smith, the Eagles will clear roughly $1.5MM in cap space.

Smith, a Louisville product, hasn’t started in any of his 37 professional appearances and he has just four career sacks to his name. The 25-year-old is coming off his first 16-game season, but he mustered only 12 tackles and 2.5 sacks in his 268 defensive snaps. He was contributor on special teams, playing over 40% of the unit’s snaps, but that wasn’t enough to justify his salary.

The Eagles claimed Daniels off waivers from the rival Redskins in May only to waive him in early June. Nearly two months later, he has circled back to the Eagles. Nigel Bradham, Jordan Hicks, and Mychal Kendricks project as the starting linebackers for Philly with Kamu Grugier-Hill, Najee Goode, Joe Walker, Alex McCalister, fifth-round pick Nate Gerry, and Daniels among those pushing for reserve jobs.

The Eagles have waived linebacker Steven Daniels. It was a short stay for Daniels, who was claimed off waivers from the Redskins just last month. 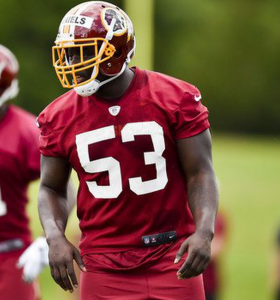 In his final year at Boston College, Daniels tallied 82 total tackles, including 16.0 tackles for a loss and 6.0 sacks. The Redskins went on to use a seventh-round pick on him in 2016, but he never saw live action thanks to a torn labrum.

The Eagles did not select a linebacker in the draft this year (first-round pick Derek Barnett profiles more as a defensive end), so it seemed like Daniels had a shot at making the final cut. For one reason or another, he has been jettisoned long before that point.

The Eagles have claimed linebacker Steven Daniels off waivers from the Redskins, the team announced. Daniels was let go by Washington on Tuesday along with three other players.

In his final year at Boston College, Daniels tallied 82 total tackles, including 16.0 tackles for a loss and 6.0 sacks. The Redskins went on to use a seventh-round pick of him in 2016, but he never saw live action thanks to a torn labrum.

The Eagles did not select a linebacker in the draft this year (provided that you count first-round pick Derek Barnett as a defensive end), so it seems that Daniels has some shot of making the final cut.

Although the Redskins’ lease at FedEx Field runs through 2027, they and the state of Virginia are already in “very serious negotiations” about building a new stadium, Gov. Terry McAuliffe told ESPN 980 on Friday (via J.J. Regan of CSN Mid-Atlantic). “We’re very aggressive,” revealed McAuliffe, whose state is the home of Redskins training camp and, as he noted, many of their fans and players. The Redskins have played in Landover, Md., since 1997, and McAuliffe expects both Maryland and Washington, D.C., to eventually make their own stadium pitches to the club. In the meantime, McAuliffe hosted a group of Redskins executives at the governor’s mansion Thursday, according to Regan. “If we can come up, be creative with a deal that works for everybody, then I think the team will be here,” said McAuliffe.

More on Washington and its chief division rival:

The Seahawks and second-round pick Jarran Reed have agreed to terms on a contract, his representatives tell Adam Caplan of ESPN.com (on Twitter). The defensive tackle is scheduled to earn $4.889MM ($1.756MM signing bonus) over the life of his four-year rookie deal. Seattle is hoping that Reed will help to beef up the defensive line in the absence of Brandon Mebane.

Meanwhile, the Seahawks have also agreed to terms with guard Rees Odhiambo, as Mike Garafolo of FOX Sports tweets. The third-round pick will have a shot to win a starting job right out of the gate in Seattle.

Here are more of the latest draft pick signings from around the NFC: