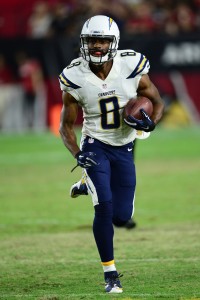 Herndon, 23, had spent most of his career on the Chargers’ practice squad, but saw action in eight games on the club’s active roster in 2015, during which time posted 195 yards on 24 receptions. Additionally, Herndon was a factor on special teams, averaging 7.4 yards per punt return and 22.4 yards per kick return. After suffering a knee injury last August, however, Herndon was placed on injured reserve and spent the entire season on the sidelines.

While Herndon would likely have trouble seeing regular offensive snaps given that Houston’s depth chart is led by DeAndre Hopkins, Will Fuller, and Braxton Miller, he could help out as a returner. The Texans ranked dead last in special teams DVOA a season ago, and lost 8.3 points on kick returns. If signed, Herndon would likely compete with Tyler Ervin — a 2016 fourth-round pick who was Houston’s primary return man last year — for playing time.

The Texans signed wide receiver Dres Anderson earlier today, so it’s unclear if the club is still interested in adding another pass-catcher such as Herndon.

Herndon, 23, had spent most of the past two seasons on San Diego’s practice squad, but saw action in eight games on the active roster last season, and posted 195 yards on 24 receptions. Additionally, Herndon was a factor on special teams, averaging 7.4 yards per punt return and 22.4 yards per kick return.

Herndon had been battling for a roster spot amid a WR depth chart that has already lost Stevie Johnson for the season, and saw the release of veteran James Jones yesterday. Herndon’s injury should be a boon to the chances of recent waiver claim Rasheed Bailey making the Bolts’ roster.

The Chargers have announced a series of moves, the most notable of which was previously reported, with wide receiver Keenan Allen landing on the injured reserve list. Another key offensive contributor, running back Branden Oliver, will also head to IR, according to a team release.

Chargers’ Keenan Allen Out For Season

12:55pm: Allen will be placed on injured reserve and will officially be sidelined for the season, reports Michael Gehlken of the San Diego Union-Tribune (Twitter links). Allen, who has a lacerated kidney, underwent a procedure on Monday to stop the bleeding, but is expected to eventually make a full recovery.

TUESDAY, 12:15pm: Allen has undergone a non-surgical kidney procedure and may be sidelined for the rest of the season, tweets Adam Schefter of ESPN.com. The wideout’s exact recovery timetable is still unknown, but if the club decides to place him on IR, Tyrell Williams or Javontee Herndon could get a promotion from the practice squad, tweets Eric Williams of ESPN.com.

MONDAY, 5:38pm: Chargers wide receiver Keenan Allen will be out for “some time” with a kidney issue, coach Mike McCoy told reporters (via Michael Gehlken of U-T San Diego). Allen suffered a kidney injury Sunday when he landed hard after a receiving touchdown against the Ravens.

Allen, 23, recorded 67 passes for 725 receiving yards and four touchdowns through the team’s first eight games. While Allen was inconsistent in 2014, he was well on his way to meeting and exceeding his level of play in 2013. In that breakout rookie campaign, Allen recorded 71 catches for 1,046 yards with eight scores.

It’s not clear exactly how long the Chargers will be without Allen, but they do have the option of going out-of-house for help if they want to make a trade before the deadline. If the Bolts stand pat, they can promote either Javontee Herndon or Tyrell Williams from the practice squad to help replenish their depth. Antonio Gates is also likely to see an uptick in targets while Allen is sidelined.