TUESDAY, 4:21pm: The Patriots have formally released Ball, following his arrest, a source tells Mike Florio of Pro Football Talk. Ball had been re-signed by New England on February 1, according to Mike Reiss of ESPN.com (Twitter link), so he didn’t last long on his new reserve/futures contract.

MONDAY, 5:56pm: Prosecutors charged Ball with misdemeanor disorderly conduct, according to Ed Treleven of Madison.com, and the former second-round pick will not face a felony charge.

But Ball, who was released from jail earlier today, also faces a misdemeanor battery charge, according to a criminal complaint filed in Dane County (Wis.) Circuit Court, for striking the woman on the face five days before this incident occurred.

The battery charge carries a nine-month maximum jail term, per Treleven, with the disorderly conduct charge carrying a maximum penalty of 90 days in jail.

FRIDAY, 2:07pm: Former Broncos running back Montee Ball was arrested by police in Madison, Wisconsin early Friday morning after he allegedly pushed his girlfriend into a table at a hotel, according to Bill Novak of Madison.com. Novak writes that Ball was taken to the Dane County jail on a “tentative charge” of substantial battery. 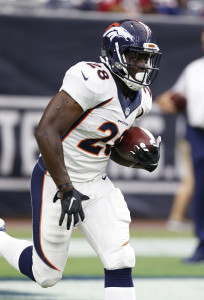 “The woman told police she had a dispute with her boyfriend,” a police source told Novak. “She said he put his hands on her, picked her up and threw her.” The source added that Ball was “very cooperative” with police.

Ball, 25, had a solid rookie season for the Broncos in 2013 after being selected in the second round of the draft, running for 559 yards and four touchdowns. However, he took a step backward in 2014, and was waived by Denver prior to the 2015 regular season.

After working out for a handful of teams, Ball eventually signed in December with the Patriots’ practice squad to help provide depth for a New England team dealing with multiple backfield injuries. Even then though, Ball wasn’t promoted to the Pats’ active roster and wasn’t believed to be in great shape — Ed Werder of ESPN.com noted that the running back weighed about 205 pounds when he was drafted by the Broncos, and was in the 230s as a Patriot.

With Ball’s on-field potential seemingly on the decline, his off-field legal run-in figures to further decrease his odds of finding a spot on an active roster for 2016. Whether or not Ball is ultimately prosecuted for this incident, the NFL will conduct its own investigation, and could decide to suspend the running back for violating the league’s personal conduct policy.

The 2015 Jets are showing a lot of similarities to the 2011 Jets, and they’d better hope those similarities end soon, Manish Mehta of the Daily News writes. Four years ago, the Jets crushed the a pitiful Chiefs team to go 8-5. On Sunday, this year’s Jets team crushed the hapless Titans to improve to 8-5. In 2011, the Jets imploded in their last three games to finish 8-8, and that’s a fate that Gang Green must try and avoid.

Here’s more from around the AFC East, including one more Jets note:

Here are today’s practice squad signings and cuts from across the league:

With LeGarrette Blount banged up, the Patriots have added some insurance at running back by signing former Bronco Montee Ball to their practice squad, tweets Adam Schefter of ESPN.com. Depending on Blount’s status, Ball could be a candidate for promotion this week or later in the season.

A Heisman finalist while at Wisconsin in 2011, Ball was selected by Denver in the 2013 draft, and was expected to be inserted as the starting running back in the Broncos’ high-powered offense. Over the course of two seasons though, Ball was never able to secure the No. 1 role in Denver’s backfield, losing the job to Knowshon Moreno in ’13 and C.J. Anderson in ’14. All told, Ball saw less than 200 carries during his time with the Broncos, and totaled less than 800 yards on the ground.

Since being cut by the Broncos in September, Ball has been out of work, though he had multiple tryouts, including one for the Pats. Most recently, the 25-year-old auditioned for the Packers earlier this month, and according to Ed Werder of ESPN.com (Twitter link), Green Bay was unimpressed with his physical conditioning.

The Bears got some good news on Monday when they learned that offensive stars Matt Forte and Eddie Royal do not have season-ending injuries, as Adam Jahns of the Chicago Tribune writes. However, Forte’s MCL will rule him out for at least two weeks, according to ESPN.com’s Chris Mortensen (Twitter link). So, with that in mind, the Bears are considering free agent Montee Ball, Mort says (via Twitter).

Ball, 24, has history with Bears coach John Fox from their time together in Denver. The tailback was cut loose by the Broncos in early September and has yet to find his next NFL job.

Earlier this year we learned that the Falcons and Patriots are among the clubs with interest in Ball. The Colts were also thought to be a possible fit for Ball, but they have since reunited with Ahmad Bradshaw.

The Patriots worked out former Broncos running back Montee Ball today, a source tells Ian Rapoport of NFL.com (on Twitter). Ball was cut loose by the Broncos in early September and has yet to find his next NFL job.

Earlier this month we learned that the Falcons are among the clubs with interest in Ball. The 24-year-old could also be a fit for a team like the Colts, but there has been no reported interest on that front.

Holder On Colts’ Running Back Situation

The Colts have a potential need at running back after just one week. Their big free agent acquisition, Frank Gore, carried the ball only eight times for 31 yards in that game against the Bills. As a team, they only had 44 yards on 13 carries from their backs–Andrew Luck had 20 yards on four attempts.

Stephen Holder of the Indianapolis Star believes that despite chatter, the Colts have not made a decision about whether they will bring in a veteran back to pair with Gore and rookie Josh Robinson. He writes they will likely wait a week or two before strengthening the position group, in order to see what they currently have on the depth chart (via Twitter).

However, he also mentions that while he isn’t sure they will definitely sign a veteran back, the team is doing their due diligence in examining the free agent market for possible options (via Twitter).

While there are rumors that the team will bring in another player, Holder writes that the team wouldn’t have waited to make that move (via Twitter). If general manager Ryan Grigson was positive the team needed new blood in the backfield, the team would have signed a running back already.

One name that has been rumored to be considering joining the Colts is former Bronco Montee Ball. There have been reports Ball told people he would be signing with the Colts imminently. However, Holder says that is all third-hand information, and that he has not been able to confirm those reports (via Twitter).