Rams running back Tre Mason was arrested in Hollywood on Saturday, according to Paradise Afshar of ABC 10. Mason was charged with resisting arrest, possession of cannabis, reckless driving, and failure to register a motor vehicle. 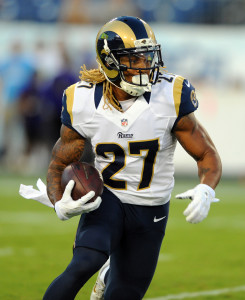 Clearly, the arrest not only means Mason will likely face a suspension, but it could also put his status on the Los Angeles roster in question. Mason, 22, acted as Todd Gurley‘s backup in 2015, rushing for 2.8 yards per carry on 75 attempts and scoring once. As a starter in 2014, Mason was performed much better, averaging 4.3 yards per attempt in 12 games. Mason is signed thorough 2017 at near-minimum rates.

The Rams are still “gathering information” on the situation, tweets Nick Wagoner of ESPN.com, and while it’s doubtful the club will take any action before the league does, Mason’s arrest could force Los Angeles to look for another running back in the coming weeks. Besides Mason, the Rams also have Benny Cunningham and Malcolm Brown, among others, behind Gurley.