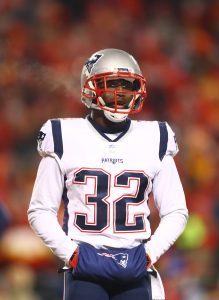 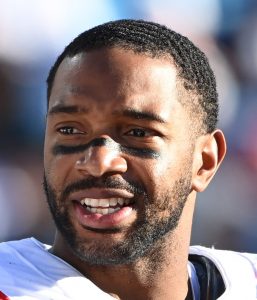 Phillips evolved from an undrafted rookie into an All-Pro special teamer with the Chargers. He caught on with the Patriots in 2020, signing a two-year, $6MM deal ($3MM guaranteed). After starting 24 games in six seasons for the Chargers, Phillips has started 27 games in one-plus seasons with New England.

Following a first season in New England that saw him starting all 16 games and collecting a career-high 109 tackles, Phillips has had another productive season with the Patriots in 2021. In 15 games (11 starts), the 29-year-old has compiled 76 tackles, eight passes defended, and four interceptions. He ranks among the top of Pro Football Focus’ ranking of top coverage safeties, and he also earned a spot on the site’s recent “All-Pro Team.”

While Phillips is listed as a safety, Bill Belichick and co. haven’t been afraid to use the veteran throughout their defense. Per Next Gen Stats (and passed along by ESPN’s Field Yates on Twitter), Phillips has played more than 100 defensive snaps at safety, slot cornerback, outside linebacker, inside linebacker, and edge. He’s also seen time at perimeter cornerback and interior defensive line.

The Patriots have agreed to a two-year deal with former Chargers safety Adrian Phillips, according to Charles Robinson of Yahoo Sports (Twitter link).

Phillips, 28 next week, had spent his entire career with the Chargers after entering the NFL as an undrafted free agent in 2014, but on paper, he looks like the perfect Patriot. Not only is he something of a hybrid player capable of playing both safety and linebacker, but he’s extremely active on special teams.

Phillips played on at least 40% of Los Angeles’ ST snaps in each of the past five seasons, and earned a first-team All-Pro nod as a special teamer in 2018. New England head coach Bill Belichick has always placed a priority on special teams play, and Phillips will certainly see his fair share of action in that capacity.

But Phillips will likely have a role on defense, as well. The Patriots have deployed a number of three-safety looks in recent years, and with Duron Harmon now in Detroit, New England has roughly 600 vacant safety snaps to fill. Phillips could slot into Harmon’s old role alongside Devin McCourty and Patrick Chung. 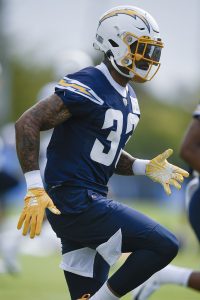 Adrian Phillips is on his way back to the Bolts. On Thursday, the Chargers designated the safety for return from the injured reserve list.

Phillips suffered a broken forearm in a September loss to the Lions, knocking him out of action. The Chargers have remained optimistic about his chances to return this year, however, and he’s primed to do just that. The sixth-year pro now has a three-week window to practice and get ready to play. If the Chargers do not activate him within that timeframe, he will not be eligible to play this year.

Phillips earned his first career Pro Bowl nod last year, and the Bolts were excited to see what the hybrid safety/linebacker could do in 2019. Instead, they’ve had to get by without him and other key defenders which has led to some mixed results. The Chargers managed back-to-back wins against the Bears and Packers recently, but Thursday night’s loss to the Raiders has them at 4-6 and on the verge of falling out of the playoff chase.

Things won’t get much easier for the Chargers – they’ll face the Chiefs on Monday night in Mexico City and quarterback Patrick Mahomes says he’s feeling better than he has all season.

Phillips suffered a broken forearm in Sunday’s loss to the Lions. The Chargers can bring back both players from IR, but James will obviously reside atop this figurative queue. Phillips’ status will likely depend on how the Bolts’ injury situation looks at the midseason point, though Lynn did confirm the sixth-year player will be an IR-return candidate, per ESPN.com’s Eric Williams (on Twitter).

Phillips earned his first career Pro Bowl nod last year, and the Bolts were excited to see what the hybrid safety/linebacker could do in 2019. Instead, they’re down two key defenders as they head into Week 3 against the Texans. A part-time starter in five previous Bolts slates, Phillips opened this season with the first unit in both games.

Los Angeles will be down to Rayshawn Jenkins, second-round pick Nasir Adderley and Jaylen Watkins at safety for the time being.

More bad news for the Chargers’ secondary. Safety Adrian Phillips, who has been filling in for the injured Derwin James, suffered a broken forearm during Sunday’s loss to the Lions, Adam Schefter of ESPN.com tweets. He’s out indefinitely and the team will not have a clear read on his timetable until doctors take a closer look at his situation.

Phillips was rolling to start the season – he had six tackles against Detroit and posted eight in the Bolts’ 13-10 overtime win over the Colts in the opener. But, unfortunately, he cracked his arm while taking Kerryon Johnson down on Sunday. It’s possible that he can still return this season, but he’ll be out for several weeks, at minimum.

Phillips earned his first career Pro Bowl nod last year and the Bolts were excited to see what the hybrid safety/linebacker could do in 2019. Instead, they’re down two key defenders as they head into Week 3 against the Texans.

Meanwhile, they’re keeping their fingers crossed on starting cornerback Michael Davis, who missed Sunday’s game with a hamstring injury. If Jaylen Watkins is needed to take the place of Davis, then Desmond King may be called upon to cover for Phillips.